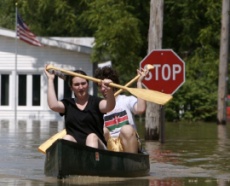 Temperatures across the world could rise as much as 4 degrees centigrade this century, a new United Kingdom report claims, setting off a chain reaction of flooding, droughts and mass extinctions.

Although it doesn’t sound like much, a 4C rise (about 6 degrees Fahrenheit) would be disastrous, in part because large structures like glaciers depend on specific temperature ranges, and in part because regional variations could be much wider. Professor Bob Watson told the UK government that it should be prepared for major changes, despite a plan to keep any temperature shifts under 2C.

The UK is an interesting source of information about climate change, because government scientists there have encountered far less resistance to their research than counterparts in the United States. As a relatively small country surrounded by water and dependent on ocean currents to maintain the temperate weather, the UK would be betting on its own future existence by ignoring climate change. It has led the way in studying the phenomenon with reports like the Stern Review.

But for a country like the US, such a large temperature swing would still be massively destabilizing. Worldwide, a climate shift would cause torrential rain in some places, and harsh droughts in others; both cases would require strenuous efforts to control, sanitize and supply water, both for human consumption and agriculture. Even small changes could destabilize worldwide water supplies. Meanwhile, in the case of a major change, rising sea levels would send waves lapping into every coastal city.

If or until those events occur, Watson has recommended heavy government investment in carbon capture and sequestration for coal plants, despite the litany of criticisms others have leveled at the technology. (More on the US government’s moves toward CCS direction later today).

As a counterpoint to the dire predictions, it’s also possible that scientists in the UK overstate estimates in an effort to spur action. And whether the world is actually warming up or not remains a point of contention — even though some changes can already be seen.