The green building sector has been awash with VC cash in recent months: Despite there only being a few dozen startups in the nascent field, investors have started paying close attention — helping several raise new rounds of funding.

New Jersey-based Hycrete, which produces an admixture (or liquid solution) that is used to waterproof concrete, completed its second round in 2006. Just one more, CEO David Rosenberg says, could take it to profitability; in late February, he said he was seeking $10 – 20 million. Its investors include RockPort Capital Partners and NGEN Partners. Hycrete’s admixture was one of the first to receive a cradle-to-cradle certification through McDonough Braungart Design Chemistry, a green product and design firm. The designation “cradle-to-cradle,” coined by architect William McDonough and Michael Braungart, refers to a product that can be completely recycled or re-used. It was also selected as a Technology Pioneer at this year’s World Economic Forum.

A mixture of sand, aggregate, cement and water, the admixture acts as a replacement for the external membranes that are typically used to keep water from seeping into concrete. When it is mixed into concrete, it links up to metallic ions and behaves like a hydrophobic solution (like oil) — repelling water. Because it doesn’t require volatile organic compounds (VOCs) or other harmful chemicals, the corrosion-resistant concrete can safely be recycled and reused in other projects. Conventional forms of concrete, which use permanently bonded waterproofing membranes, are sent to landfills.

Hycrete’s technology has already been used in more than 75 projects worldwide — including several Marriott and Hilton hotels and condos and apartments in Seattle. Other applications include mixing it into roofing material to make green roofs — roofs covered by lawns — or into drywall to stop moisture seepage.

The admixture reduces energy waste, cuts costs and lets builders receive Leadership in Energy and Environmental Design (LEED) points. Developed by the U.S. Green Building Council, the LEED accreditation indicates a building has successfully adopted a suite of rigorous green building standards. The rating is seen as a boon by companies seeking to bolster their environmental credentials and is increasingly being implemented in new construction projects. Hycrete’s product helps builders reach that goal faster. 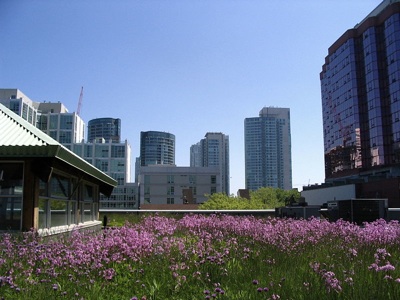