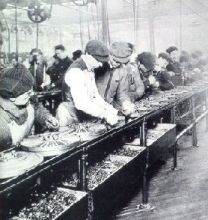 A few years ago, it was still a subject of regular outrage. Jobs were headed to Mexico. Factories moving to China. Everybody hated globalization, without quite understanding it. But with a flood of news coverage — the slightly nauseating peak being an all-too-popular book about the world being flat — people finally figured it out: The manufacturing jobs were gone. Get a job banking, or flipping burgers, but don’t expect to be building cars or making clothes.

The idea is that we should switch to a knowledge-based, service-oriented economy. And Silicon Valley, for one, long ago pinned its hopes on brains over brawn. Just take a look at the companies that get funding. But now that everyone’s getting used to the knowledge economy, manufacturing may make its comeback.

Here are the primary factors driving a manufacturing renaissance: The rapid growth of middle class consumers in countries like Brazil, China and India; a shrunken dollar and the loss of economic pre-eminence by the United States; less easy credit for overseas goods for consumers in the US; and, potentially, rising transportation costs that cut into cheap goods sent from overseas.

Those details are outlined by the CEO of the Manufacturers Alliance, Thomas Duesterberg, in this Industry Week article. There are a few more that could be added to the mix, though.

The first is our bid at shifting energy usage at home off foreign oil. Companies like Ausra, Nanosolar and Tesla are basing not only their research, but their plants in the United States. They have plenty of reasons to do so. States, eager to win back jobs lost long ago, are offering hefty incentives. Materials like solar mirrors and wind turbines are expensive to ship, and solar panels often break during long voyages. And for Tesla, there’s an additional prestige to having a car manufactured in the U.S., even if some parts are made overseas.

Another good example is Infinia, a solar company that is reducing its own startup costs by using existing manufacturing capacity in the country, much of which has been idle for years, to builds its solar dishes. And finally there are the many biofuel startups, many of which have no choice but to place their plants near the sources for their fuel. As the market for renewables grows, more will certainly be built here.

The need for specialized work will also become more prominent with the rise of next-generation materials, especially nanomaterials. Although fabless manufacturing in the semiconductor industry proved that high-tech work can be done overseas, the first generation of manufacturing will be at home. And with costs for overseas labor rising, the new nano industry may choose not to move elsewhere.

There are also opportunities for less commercial production. As the online marketplace Etsy has shown, there’s a nascent industry of crafters who are are eager to sell their goods. Ponoko, for one, wants to help those people create their goods, with online tools and a relatively inexpensive production process based on laser cutters.

And for the professionals, the small design firms and build shops of the world, cheap rapid prototyping and rapid manufacturing technology are on the rise, a subject that I wrote about a year ago.

Whether physical production can ever dominate the American landscape again is doubtful. But the conventional view into the future, which suggests that we’ll make our way as a pure knowledge economy, is likely also off the mark. The future is never quite what you expect.