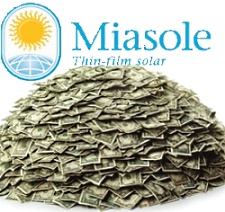 Miasole, the thin-film solar cell maker that is the third member of a triumvirate of heavily-funded CIGS startups including Heliovolt and Nanosolar, has been pretty quiet since losing its CEO and laying off 40 workers late last year. In the interim, there has been plenty of speculation that it was faltering, and might even close its doors.

Not even close, according to a report this morning. Instead, Miasole is about to close a round of between $200 and $220 million, a source has told VentureWire — and, even better, the company will have a sky-high valuation of $1.2 billion. If true, the investment would be the largest single venture funding any solar company has received to date, although the reported valuation would be lower than Nanosolar’s.

This raises some questions about what’s going on inside Miasole. Why would investors pour money into a company that, as recently as April, lost a high-profile contract to a rival? Miasole was supposed to be in full production mode by early last year, but slipped on the dates. It was also reportedly planning an IPO, but no more mention of that was made after early 2007.

For the last few months, the company had declined to talk with the media.

A giant round of funding may indicate that the company has spent the extra time honing its technology, perhaps even entirely changing its manufacturing process, which some have suggested is inferior to its competitors’ processes.

That would explain a comment an investor, Bill Reichert of Garage Technology Ventures, made to me a couple months back. Although he would say nothing specific about the state of Miasole’s technology, and admitted that the company had taken “longer than we wanted” to mature, Reichert said that it was still making progress. “We’re extremely optimistic that these guys will change the world,” he told me.

Unmentioned by VentureWire is whether the money will come entirely from venture sources, as it has in the past. Another possible scenario is that Miasole is getting ready to build a large production facility. For that, it would likely raise debt from sources like banks, rather than selling shares. But with sizable new late-stage cleantech investment funds around like the one Kleiner Perkins (another Miasole investor) just announced, a $200 million venture round is plausible.

No matter what Miasole is doing, it will face some stiff competition. Heliovolt recently hit a record cell efficiency, and Nanosolar followed up by announcing a next-generation production tool that would put it in First Solar’s league. And since Miasole first started getting press, a hoard of other companies emerged from hiding or started up in thin-film production, from ultra-stealthy Optisolar to IBM’s new CIGS research division.