Venture-backed electric car companies have been getting the lion’s share of attention these days. Fisker Automotive just raised a cool $85 million to produce its hybrid-electric Karma, and Tesla Motors has been abuzz since unveiling its Model S sedan. But that doesn’t mean the traditional auto titans are down and out. Just today, Mitsubishi announced plans to bring its all-electric i MiEV vehicle to the U.S.

This is a pretty big milestone: The car will be the first electric vehicle out of any marquee name manufacturer to be mass produced. While it didn’t say exactly when the compact, bubble-shaped car will roll into American showrooms (it will be available in Japan in July), Mitsubishi says the i MiEV will probably land first in Oregon. This might seem like an odd choice, but the state government and primary utility, Portland General Electric, have agreed to build a large network of charging stations. There are already 12 around Portland and Salem. 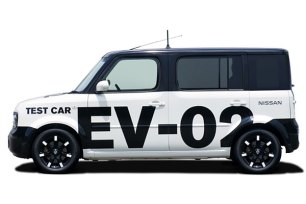 In fact, Oregon is becoming somewhat of a mecca for the electric car industry, having forged partnerships with Nissan and now Mitsubishi to get their help in developing the state’s charging station infrastructure. Earlier this week, Nissan unveiled a prototype of its lead electric vehicle (see right) in Portland, and Toyota has expressed interest in providing several of its electric RAV4 models for use as Portland State University shuttles. Oregon is also a prime candidate for Norwegian car maker Think‘s first U.S. manufacturing plant and to become a test market for Chinese auto manufacturer BYD‘s models. To attract more of this attention — and the jobs that may come with it — governor Ted Kulongoski is urging the state legislature to approve two relevant bills. The first would make electric vehicle plants eligible for business energy tax credits, and the second would modify the state’s current hybrid tax credit to encourage Oregonians to buy zero-emission vehicles. If both these measures pass, Oregon might become the default launchpad for electric car makers in the U.S.

Based on the popular “i” model car already on the roads in Japan, the i MiEV can reportedly travel at up to 80 miles an hour when its lithium-ion battery pack has been fully charged — a process that takes between 12 and 14 hours via a standard wall outlet (110 volts). The charging stations in question would slash this time with higher voltage connections. Mitsubishi says it will ramp up production on the i MiEV as soon as it receives 2,000 orders, predicting sales of 10,000 cars a year by 2011.

The company has yet to disclose a price tag for the i MiEV but has been emphatic about it being a more practical and affordable electric option (relative to Tesla’s $109,000 roadster, that is, although it does have several luxury prototypes in the pipeline). Mitsubishi says it expects, at least initially, to sell most of the cars to government agencies and fleet vehicle services (Zipcar springs to mind — it’s already a devotee of the Toyota Prius). Depending on its price and whether or not it catches on in the U.S., the i MiEV and cars like it could potentially overtake the hybrid market.

Mitsubishi’s electric ambtions are very similar to those of Nissan, which also plans to mass produce a mid-market vehicle, called the EV-02, slated to go on sale in Oregon next year. BMW is also continuing work on its BMW Mini E. At the same time, General Motors’ Chevy Volt has been experiencing some setbacks. It got dinged by the White House last week, with members of the administration’s auto task force saying the car remains prohibitively expensive and impractical. Still, GM says product development on the Volt will forge ahead, hopefully to produce a marketable model by next year.