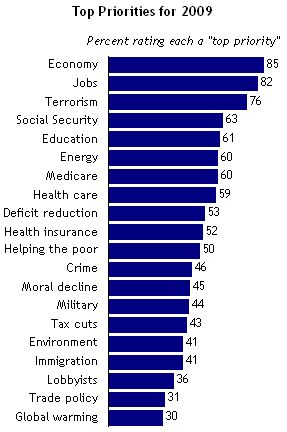 An overlooked item from the world of cleantech reporting: The ever-fickle light of public attention is fading from the problem of global warming, in favor of, well, everything else. A Pew Center report from last week suggests that there are few things people care about less than whether the sea comes creeping over their doorstep in a few decades.

The report isn’t an anomaly, either. Despite plenty of media attention, a growing number of data points suggests that the warming issue just isn’t connecting with your average Joe. Take the vehicle sales numbers around Christmas, which showed gas-guzzling pickups and SUVs outpacing car sales as gas prices fell. You can bet that growth wasn’t due to strong demand from the construction industry.

Pew’s numbers show that the number of people who consider global warming a “top priority” has declined eight percent since just two years ago, when they started tracking it. Protecting the environment has fallen 15 percent since last year; it was 22 percent higher in 2001. Energy has risen in large part because of terrorism (the previous chart topper) and the oil price peak last year.

Does public opinion matter? In the short term, perhaps not, at least for renewables like solar and wind. The recession has already taken its bite out of the sector, and now President Obama is giving cleantech perhaps the strongest boost it has ever had in the United States. But long term, the downward trend of public opinion could mean trouble.

That trouble would come from the cost and effort of switching over to cleantech. Few renewables are on par with coal, gas or oil in terms of cost, and those that are tend to have their own challenges in terms of placement and operation — think of noted environmentalist Senator Edward Kennedy’s opposition to wind power in Nantucket Sound. Public opinion similarly scuppered nuclear power decades ago because of (largely incorrect) safety fears. Besides such aesthetic concerns, people may be unwilling to take the hit for more expensive renewables like solar on their monthly electricity bill.

Perhaps more importantly, public opinion could put subsidies at risk. For now, politicians seem interested in pushing renewable energy tax credits. These credits are vital to the development of the industry. That situation might change over time, but the amount of time it will take cleantech to outgrow its need for credits and subsidies is longer than most people think; many investors are wary of getting into even small cleantech projects without the promise of five to ten years of government support.

It would be wrong to assume that it’s impossible for public opinion to turn against global warming, and by extension, renewable energy. Electorates have shown time and again that they’re willing to overlook long-term concerns in favor of short-term worries. Indeed, the Pew Center found that the economy and jobs were far and away the top concerns. It has always been thus; many tragedies, like World War II, didn’t happen because they were inevitable.

Further, global warming risks hostility because it demands large changes without offering what most people think of as solid proof. Although a majority of scientists worry about warming, most won’t go to the length of saying it’s a certainty, and a vital few claim the opposite. Another recent study found that 44 percent of people believe global warming comes down to planetary trends, an explanation that has been pushed by the theory’s detractors.

We’d better hope they’re right because other scientists are now saying that any effects of human-fueled warming are here to stay — permanently, by any human definition.