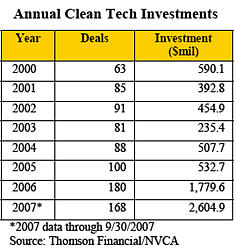 It’s no surprise this year is seeing record-breaking investment levels for the booming clean technology sector.

Venture capitalists invested $2.6 billion in companies that help the environment in some way during the first three quarters of 2007. That’s 48 percent more than the comparable period last year. In fact, its more than the entire level of investments in 2006, when investors pumped $1.8 billion into these companies Solar energy, in particular, is drawing interest this year.

While U.S. companies are still drawing the most investment, companies in other countries like the Netherlands, Brazil and China were seeing some of the largest investment dollars (see table below).

The U.S. saw 149 investments worth $1.7 billion, representing an average deal size of $11.4 million. California companies received the majority of investments with 68 deals worth $726.2 million, followed by Massachusetts and Texas.

The largest US investment was the $115 million invested in Greatpoint Energy Inc., a Cambridge, MA based company. Greatpoint operates production plants that convert coal and biomass into a product called bluegas, which aids in the power generation, industrial, heating, and chemical sectors.

The growth in cleantech investments is driven by rising concern over global warming and climate change. There is not only an economic opportunity to provide an alternative source of energy, but a sense of duty to encourage growth of clean technologies — backed by increasing government subsidies to encourage investment.

NVCA president, Mark Heesen expressed some caution, however: “As has been demonstrated in the IT and life science arenas, investing in new technologies can be fraught with pitfalls and is not for the inexperienced or the faint of heart. Prudent, long-term, knowledge based investment in cutting edge technologies has been the hallmark of venture capital in the past and should be the mantra in the cleantech space as well. Short-term ‘tourists’ should steer clear.”

New initiatives keep coming, including Google’s announcement of the RE<C initiative to invest in the sector (see our coverage). So it’s probable that cleantech investments will continue to rise in 2008. 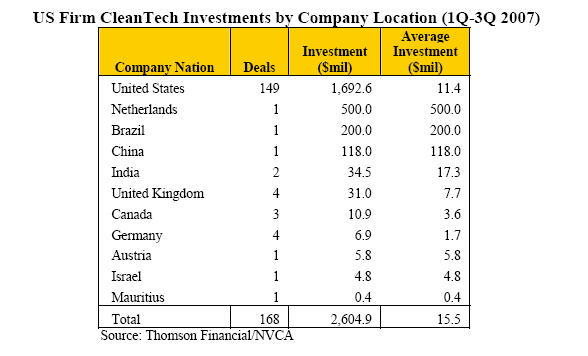