[Update: The specifics are in on the round of funding referenced below. It was for $9 million, from eBay founder Pierre Omidyar’s fund Ohana Holdings, as well as Bethel Tech Holdings, Energy Industries Holdings, Kolohala Holdings, Black River Asset Management, according to New Energy Finance.]

The latest quiet (if not stealthy) firm to come onto my radar is an odd, miniaturized version of solar thermal generation called Sopogy, that has just won a round of venture funding and is pondering a future offering on the stock markets.

Solar thermal is the catch-all term for technology from well-known firms like Ausra, Brightsource and Solel that reflects light from many mirrors onto a contained liquid, heating it up to drive a turbine. It’s usually done on a giant scale, and competes with coal generation plants. Sopogy drastically reduced the size of the generator to make it useful for much smaller applications. 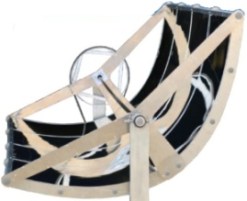 Picture a parabolic (curved) mirror aimed at the sun, with a thin pipe drawn across its middle, and you’ll have the basic idea for Sopogy’s “SopoNova.” Inside the pipe is water, and the mirror is designed so as to perfectly aim sunlight at it. The water, as in a standard solar thermal process, turns to steam to drive a generator. However, it can also be used for highly efficient heating and cooling in buildings (more on this in a moment).

The downside to miniaturizing solar thermal is that it becomes far less efficient than the large-scale projects mentioned above, so the SopoNova has to be put to different uses. At 12 by 5 feet, it’s not cut out for your house’s rooftop, either. That means the best market is in between consumers and utilites — that is, with businesses, campuses, industry and the military. At least five Soponovas have to be deployed in order to be cost-effective, in part because a single sun-tracker runs several at once. However, once a decently-sized installation is up, they make electricity for about 20 cents per kilowatt-hour, according to CEO Darren Kimura.

For reference, that’s a pretty good number if you’re not trying to do utility-scale generation. Solar panels, by contrast, cost much more,and are less efficient. The SopoNova units themselves don’t cost a great deal, and don’t require specialized technicians to maintain them, so their payback period can be well under five years.

Part of the payback calculation depends on what the Soponovas are doing. As alluded to above, the units are multi-functional — the steam they produce can go to other uses. One is air conditioning that makes use of an absorbent heat exchanger, which, oddly enough, can use steam to produce cool air much more efficiently than electrically driven air conditioners. That configuration can save large building owners like universities lots of money very quickly.

As cumbersome, even clunky, as the Soponova looks, I was struck by the cleverness of its design. The units don’t even require large manufacturing facilities to make — they can be cheaply assembled in local machining shops, using retrofitted machines like CNC cutters. Kimura is responsible for much of this innovation; he entered the cleantech field at the tender age of 19 with his first startup. Now in his thirties, he has worked through a string of other startups, and provided the seed funding for Sopogy himself.

Those other startups, as well as Sopogy, are based in Hawaii, and the company was just granted bonds from that state totaling $45 million to develop solar. However, the company just opened an office in Silicon Valley, even while continuing work in Hawaii. Having a presence on the mainland is important, because many of the company’s business leads and projects are now on the West Coast.

In fact, Sopogy has gotten enough interest, and already sold enough SopoNovas, that Kimura says he’s looking toward an IPO in the not-too-distant future. The company just completed an over-subscribed round of venture investment, although Kimura wasn’t willing to disclose the amount yet, and it’s busy finalizing more contracts and churning out its product. Previously, it had taken only $2.3 million from local firms TradeWind and Kolohala, plus about a million of Kimura’s own money.

Sopogy has gotten very little media attention to date (I received an inside tip), but unlike companies like thin-film solar company Optisolar that are truly in stealth mode, Sopogy is just keeping its head down; most of the information I’ve outlined is available on its website. Kimura says he hasn’t even bothered to get a PR agency yet. “We’ve got so many projects going on, we’ve chosen to focus on the execution rather than the hype,” he explains.

Sopogy competes with companies like SolFocus, which makes concentrating solar (a term Sopogy also used for itself) technology for use at a similar scale, as well as solar panels.