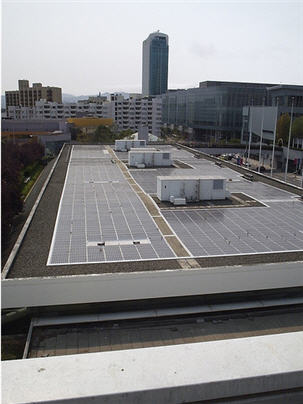 The San Francisco board of supervisors has finally given the go-ahead to the city’s contested solar rebate program, providing a big boost to area startups and paving the way for investment into solar power by consumers and businesses in the city.

The plan, first conceived of last year, initially faltered when put to a board vote. It will now take its place as the nation’s highest local solar subsidy, providing up to $6,000 to households and $10,000 to businesses. At a meeting today in City Hall, mayor Gavin Newsom said that he expects the city to become the United States’ own “Berlin of solar power” — Germany’s cloudy capital being the world leader in installed solar. There are currently 770 installations in San Francisco, while the target is 10,000.

In terms of the big picture, San Francisco alone won’t make for a noticeable rise in demand. While the 50 megawatts it anticipates being installed in the city over the next 10 years is a significant amount, it’s a blip in the world market. However, Newsom said he expects other cities to follow suit if the program looks like it’s working.

With the rebates and a newly streamlined permitting process, making solar work will be significantly easier. Together with state and national rebates, Newsom claims that a $20,000 installation can be reduced to $4,000 out of pocket — and the city is even looking to open a loan program for the remaining amount.

Local challenges remain, like a disproportionate number of renters to home owners, but the city is hoping to make solar attractive enough that it’s almost an economic must-have. The same factors that provide an incentive for San Francisco to put solar on its rooftops — less need for local generation plants, lower infrastructure costs and a higher international profile — should make it attractive for other cities.

Interestingly, the changes pushing municipal solar ahead may create a parallel structure to the innovations occurring in the solar services business with companies like SolarCity and SunRun, which are providing alternatives to buying panels up-front, like leasing and power-purchase agreements. One idea that’s been floated in San Francisco is making loan terms attractive enough that the monthly bills to pay the loan off are equal to or less than the bill for electricity bought from a utility. The city will also do some of its own marketing to raise awareness of the options.

While solar is proving itself on local rooftops, San Francisco is also moving ahead with plans to integrate other cleantech ideas. It’s currently installing vertical windmills on bus shelters, according to Wade Crowfoot, the director of government affairs. The city is also buying “solar garbage cans” — trash compactors powered by solar panels. And Newsom says he’s in talks with Project Better Place to create a regional market for electric cars and to add charging stations to parking meters for plug-in hybrids.

Will renewables and cleantech take over the city’s power needs? Not even close: “I don’t like being realistic, but we have to be honest that cleantech can’t cover everything”, Newsom says. He’s right, at least for the moment — infrastructure takes a long time, and a lot of investment, to build up or replace. But for now, it looks like at least one city is on the right track.