Another algal biofuel company has emerged from stealth mode, and this one has the biggest story yet, at least according to the estimation of its investors.

Only a year old, Sapphire Energy is a San Diego startup that has lab-developed an algae that it says can create a substance akin to crude oil that can be processed by existing refineries, transported through existing infrastructure and burned without difficulty by today’s vehicles.

Sapphire has raised over $50 million from three investors, including Arch Venture Partners, whose Kristina Burow helped co-found the company. Burow told me in an interview yesterday that Arch, along with Venrock and UK-based medical research charity The Wellcome Trust, has given Sapphire an “open checkbook” not based on the usual venture model of set rounds and valuations, from which the company can draw as much capital as necessary to commercialize the technology as rapidly as possible.

The excitement of Sapphire’s investors and founders over its technology stems in part from the size of its plans. CEO Jason Pyle says that where other biofuels can only promise to replace a small fraction of the oil use in the United States, the algae that Sapphire is working on could replace all of it.

How is that possible? Well, where fuels like ethanol and biodiesel rely on grown feedstocks — corn, sugar, switchgrass, trees — Sapphire’s algae requires no feedstock at all, just water and sunlight. Pyle claims that the requirement to grow without relying on a food crop was one of the company’s founding principles.

The two other requirements, that the algae cultivation not take useful land or use fresh, potable water, should quell many environmental concerns. Instead, Sapphire plans to use non-potable water like agricultural runoff and salt water.

One of the distinguishing factors of algae startups is that they tend to dream, and talk, rather large, and Sapphire is no exception. Like other companies, its algae has yet to be proven at commercial scales — a step that has foiled initial attempts by other companies, most famously Greenfuel Technologies, whose first large algae project grew so rapidly it choked itself out. But when I pointed that out to Pyle, both he and the two VCs I spoke to on a conference call (the other being Arch co-founder Robert Nelson) shrugged off the objection. 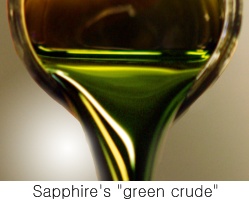 “The ability to produce this organism and use it is well understood at scale … the attempts of biofuel companies do not represent the best attempts at scaling these systems,” Pyle said. And although Sapphire won’t reveal where or how it intends to initially cultivate its algae, Pyle says it is specially developed to fit a particular niche in the ecosystem, which will both keep it from escaping into the wild, and keep wild algae from invading and damaging production, a significant problem for many algae startups.

However, despite the implicit criticism Sapphire has for its competitors, Pyle believes that there will be many winners in the algal biofuel space. “In a trillion dollar market, it’s hard to believe in a winner take all strategy,” he said.

While algae currently accounts for an almost negligible amount of the fuel market, in any country, it may take less time to commercialize than other technologies. Sapphire plans to move forward next with pilot testing, going from production of 100 barrels of “green crude” per day, to 1,000, all the way up to 10,000 per day.

If that model turns out to be the right one, the future of the biofuel industry looks fairly straightforward. Cultivation ponds drawing water from farms, waste-streams, tainted reservoirs, the ocean and other sources would be dotted thickly throughout the southern half of the United States, each producing three to four million gallons per year. To replace the entire crude oil usage of the country, it would take between two and three thousand of these ponds, according to my back-of-the-envelope calculations.

That scenario is a long way off, though: Sapphire plans to have its first commercial production plant in about three years, after which it would require billions of dollars in project financing to build up production. And how quickly that project financing comes through will depend almost entirely on the price of the finished product versus the crude oil prices at the time.