Sequesco joins a growing list of startups that are using synthetic biology to custom-produce advanced biofuels. But unlike competitors LS9 and Amyris, which are engineering microbes to make hydrocarbon-based fuels from various plant biomass sources, it uses waste carbon dioxide as its primary feedstock.

The idea is to pump CO2 from large emitters like coal plants or biorefineries into the firm’s bioreactors, in which large colonies of bacteria would use the greenhouse gas and a nutrient broth to produce ethanol, biodiesel and other valuable byproducts. The protein-rich byproduct could be sold as animal feed or fertilizer, while the lipid-rich byproduct could be converted into bioplastics.

This is similar to what GreenFuel Technologies, a Cambridge, Mass.-based algal biodiesel maker, has been doing. It pipes in CO2 from power plants or industrial processes through large ponds filled with algae to make them grow and then harvests them. Sequesco’s business model can best be described as a hybrid between what GreenFuel and Amyris are doing.

Sequesco’s bacteria grow 10 times faster than most algae raised for biodiesel, and because they are non-photosynthetic, they can be grown 24 hours a day, rain or shine. Area isn’t a constraint for the bugs (only volume is), so they can be cultured in conventional, low-cost bioreactors. Since space isn’t an issue, there’s great potential for scalability, and the bioreactors can be installed almost anywhere.

One of the technology’s main benefits, CEO Lisa Dyson tells me, is that it makes biofuel production a two-step process: CO2 to biomass and then to ethanol/biodiesel. This helps keep costs in check and dramatically speeds up the process — which will come in handy when the firm transitions into commercial-scale production.

Over time, the firm plans to further modify the microbes to coax them into producing more lipid- and carbohydrate-rich biomass — which, in turn, would mean more biodiesel and ethanol. Its long-term goal is to make it a one-step process: CO2 to biofuel.

Dyson thinks combining sequestration with biofuel production will also help give her firm an edge over rivals. Piping in waste CO2 from emitters lets the company reduce its carbon footprint and would, through a cap-and-trade system, allow it to earn revenue by selling carbon credits.

With the ethanol backlash still going strong — a leaked World Bank report recently concluded that biofuels have caused food prices to increase by 75 percent — money has been pouring into algal biodiesel and cellulosic ethanol. Sapphire Energy and Aurora Biofuels, both algal fuel producers, have raised major funding rounds — to the tune of $50 million and $20 million, respectively — over the past few months. EdeniQ, an Encino, Calif.-based cellulosic ethanol startup, raised $33 million in May and claims to be hard at work on bringing the cost below $1.50 a gallon in the near future.

While still a young firm — it was started this February — Sequesco has already set some ambitious targets. Dyson said it planned to have a demonstration facility up by the end of 2010, to be followed in short succession with small and large commercial-scale plants in subsequent fiscal years. It may appear later this year at CopenMind, a cleantech event which aims to help universities market their licensable technologies to VCs and other investors.

At this stage, the firm is looking for seed funding and has already talked to several private investors.

updated, with some corrections 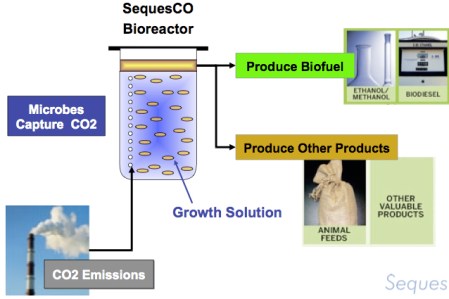