While the market for silicon solar panels appears to be growing at a healthy clip, several factors could either retard or speed its development. A worldwide silicon shortage, government investment credits, energy prices and the existing financing and installation models for solar panels are all in flux. But recent developments in all of those sectors suggest a positive outlook for the sector.

First up, Trina Solar‘s recent decision to cancel its $1b silicon plant is widely seen as a promising sign that the polysilicon shortage may be coming to an end — or, at least, that companies are reassessing their capacity given the difficulty of producing silicon. The company had begun planning the facility in late 2007, when a silicon squeeze threatened to shut off production completely for any company unlucky enough to not have a set supply contract.

Second, the Senate’s recent approval of the Clean Energy Tax Stimulus Act of 2008, which will provide an additional $20 billion to fund renewable energy projects, could, if ratified by both the House and president, encourage further investment. The House passed its own standalone bill, H.R. 5351, to renew an existing tax credit for renewable energy sources set to expire at the end of this year; the bill had previously been struck down twice by the president and faced resistance within the Senate, because it pulled investment credits away from oil companies.

Supporters in the Senate are applying pressure toward ratification of the new bill, but the lack of a clear funding source for the credits puts it at risk both before the House. However, if passed, the measure will give solar manufacturers and installers a 30% investment tax credit and provide up to $500 to consumers looking to invest in energy-efficient products for their homes.

While silicon supply and government policy are both forward-looking, the current trend of rising fossil fuel prices and shifting consumer sentiment have meant that sales are still brisk for many companies — a momentum manufacturers and installers are hoping to maintain as they hire new workers and increase production. Akeena Solar, which just announced the Andalay, a cheaper, ready-to-install solar panel, is considering moving into new U.S. markets — citing “favorable” electricity rates and “large and sustainable incentives for solar power.” The company just signed a deal with Kyocera, the Japanese electronics manufacturer, to begin manufacturing the Andalay panels.

Another installer, Borrego Solar, which specializes in solar panel systems for both commercial and residential markets, is planning on expanding its operations throughout the country and on raising capital for the first time in the company’s history. Even companies like Standard Renewable Energy, which sell their renewable energy products, including solar cells, in supposedly environmentally “unfriendly” states, have been growing at a fast clip.

New incentive and loan programs, such as PSE&G Solar Loan Program and SolarCity‘s SolarLease aim to convince homeowners who don’t want to lay down an intimidating lump sum to get solar panels. For home developers, economies of scale and growing consumer interest in “green” features mean they will also find more merit in installing panels on new projects.

Solar firms are also hoping that consumers, armed with their shiny rebate checks, will opt to purchase panels to save on energy costs over the long run. Even if consumer sentiment continues to sour at home, many companies are hoping that business in foreign markets will help sustain their growth (and bottom lines).

Despite the upbeat mood in the clean energy sector, worries about the credit crunch and regulatory uncertainty on Wall Street have somewhat dampened private equity and venture capital investment. As we noted yesterday, fewer venture capital firms raised money this past quarter than at any time during the last two years; a report from New Energy Finance, a London-based firm that tracks investments in cleantech, corroborated the downbeat trend, finding that VC and private equity investments fell to $2.4b in the first quarter, from $3.7b last year.

The continued credit grind could yet start digging into solar installers’ bottom lines if investment continues to drop; government-coordinated initiatives such as the $875m Southern California Edison program to blanket the roofs of unused commercial rooftops with solar panels — enough to generate 250 MW, which could power 162,000 homes — in addition to other rebates, could help offset any such losses. Even pessimists expect growth in the solar sector to continue in 2008, albeit at a slower rate. 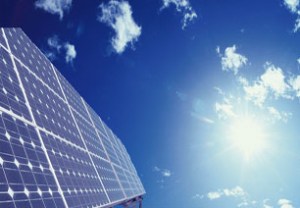