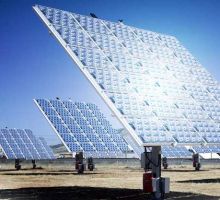 SolFocus, the most heavily-funded concentrating solar startup around, has just drawn a bit further ahead of the pack with $47.5 million in fresh capital. With the money, the company has edged near $150 million in total funding, and with luck, widespread installation of a currently rare type of solar panel.

In the concentrating photovoltaic (CPV) arrays of SolFocus and similar companies, a tiny, highly-efficient solar cell becomes the focus of sunlight intensified many times over by lenses and mirrors. The technology’s creators claim it’s a better, cheaper way to harvest solar energy than a regular solar panel. But in the eyes of the energy industry, it’s still a young, unproven technology.

SolFocus has stood out by being one of the earliest founded, and most heavily supported, of the CPV outfits. The company was founded in 2005, and spent its early years at the Palo Alto Research Center (PARC), where some of today’s most uniquitous technologies were first conceived.

Also of note is a deal the company struck in November of last year, a $103 million purchase of its panels by Spanish company EPME Solar. The agreement was the largest of its type so far and should help prove whether CPV is a worthwhile technology.

Although $47.5 million is a rather large amount, SolFocus is looking to cap off the round at $60 to $70 million, which may happen later this quarter. The investment was led by Apex Venture Partners, with help from New Enterprise Associates and NGEN Partners. The Mountain View, Calif. company also promoted president Mark Crowley to the role of chief executive.