A new solar technology that creates hydrogen as well as electricity is on the horizon. Sundrop Fuels, a stealthy New Mexico company with an innovative dish design, has licensed structural ideas from larger and better-known startup, eSolar, to create something unprecedented.

Sundrop has been secretive about its technology since its inception, but word of a $20 million investment from Kleiner Perkins slipped out earlier this year. With some digging, I turned up a few details on Sundrop’s “solarec” technology, which produces several byproducts using energy from sunlight.

Solarec, short for Solar Reduction of Carbon Dioxide, can not only produce hydrogen, but also desalinate water and create methanol, a useful fuel. With the disclosure of this information, Sundrop may finally be poking its head from its shell, but details on its actual process are few and far between.

We do know that eSolar’s contributions relate to the mirrors, or heliostats, that aim sunlight into a central receiver, as well as the tracking technology that keeps dishes at an optimal angle. Both are vital to the operation of the overall package, which must remain cost-competitive with solar thermal devices, solar panels and other renewable sources.

Google-backed eSolar, meanwhile, is on the path to build out utility-scale electrical plants, first across California and eventually the country. The fact that Sundrop is borrowing technology from the startup suggests that it has a non-competitive technology — likely intended for off-grid, government and institutional use — and is also rapidly approaching commercialization. 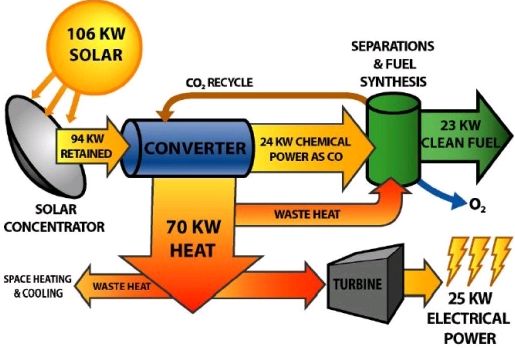