Plenty has been written about electric utilities’ need for better information about the power their customers are using, and a number of companies are tackling that problem. But what about customers — shouldn’t they get the same info? For the first time, consumers may have a chance to see their power usage patterns, with a suite of devices from Tendril Networks.

Utilities get data from the meters attached to every home and business that uses electricity, letting them see minute-to-minute usage. The challenge is to give people in their homes the same view in a convenient way, so that they know when prices are high or low, how much they’re using, and which of their household devices, like heat pumps and refrigerators, are energy hogs.

Tendril’s Residential Energy Ecosystem (TREE) gives several points of control. A display called the Insight shows current electricity prices, the amount spent so far over the month, and issues an audio or visual alert in case of a price spike or emergency. The Volt is a wall plug-in for devices that tracks and controls their 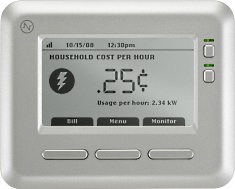 energy usage, and Vantage is the company’s software portal that allows consumers to set rules (like not turning on the air conditioner when they’re out of the house) and remotely control the system.

The company is well along in development, and the Insight, when CEO Adrian Tuck showed it to me, impressed me with its ease of use. Tuck says they’ll have 50,000 units distributed by the end of the year, and hopes to have half a million out by the time 2009 is over.

Like the many other players in this space — ComVerge, Eka Systems, Silver Spring Networks, Trilliant and others — Tendril is working through utility partners to prove that its products work. However, there’s some added risk for Tendril in reaching out to consumers.

The Volt, for example, will cost a buyer about $30 if picked up at a retail outlet. If used for a plasma screen television, Tuck says the return on investment for that person is about 6 months. That’s not too shabby, but there’s one problem; consumers don’t think in terms of ROI. If they did, they probably wouldn’t buy things like SUVs and giant plasma screens in the first place.

Tuck acknowledges that problem, noting that both environmentalists and cheapskates can be relied on to create an initial market. However for the third group, whom he calls “those who are apathetic about the whole thing,” Tendril hopes that a utility-controlled, entirely automated system will convince them to install a few new devices in their home.

Tendril recently raised $12 million from several venture investors, but it will be looking for a much larger round at the end of this year of around $50 million, for which it might tap into private equity or strategic partnerships. The company is based in Boulder, Colorado.