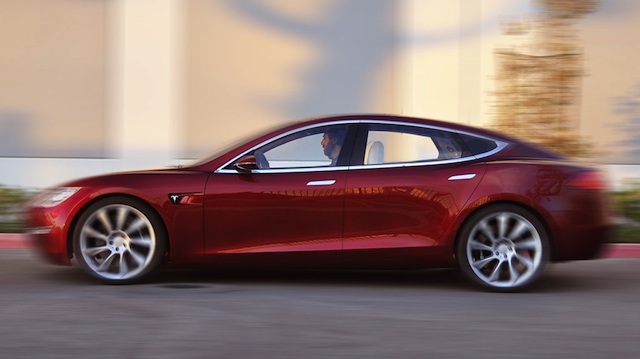 We already know a lot about the all-electric 2012 Tesla Model S sedan — but at a press event ahead of yesterday’s exclusive VIP event at the former Toyota NUMMI facility in Fremont, California, Tesla CEO Elon Musk announced Tesla was making a faster Model S for those with a sporty side.

Cutting the brisk 0-60 time of the standard Model S from 5.6 seconds to under 4.5 seconds, the sportier version features the same 85 kilowatt-hour, 300 miles-per-charge battery pack found in the 2012 Model S Signature series.

“That’s quicker than a [Porsche] 911 [Carrera],” joked Musk. “Not bad for an electric luxury sedan.”

The additional model, complete with enhanced powertrain to cope with the additional current required for faster acceleration, will be available from launch alongside the 120 mile, 230 mile and 300 mile 2012 Model S cars.

But if you thought 300 miles was the maximum range a Tesla Model S could do, you’d be wrong.

When the batteries are depleted, Tesla says even the 300-mile range Model S will be able to recharge from empty to full in under an hour thanks to its new direct current external charger. The 90 kilowatt units will be installed by Tesla at suitable rest-stop locations or hotels alongside arterial freeways such as I-5 between Canada and Mexico.

On-board AC charging will be dealt with through either a single 10 kilowatt charger or two 10 kilowatt chargers. Tesla says the two options were developed after it realized that many of its existing Tesla Roadster customers did not use the full capability of its 17 kilowatt on-board charger, recharging instead at a more sedate 7 kilowatts or less.

Tesla says it now has 6,000 customers who have reserved its 2012 Model S with deposits of $5,000 or more. If it sells each of the cars it has taken deposits on, that means Tesla will have sold out of the first year’s allocation of Model S sedans a whole nine months before the first one reaches a customer.