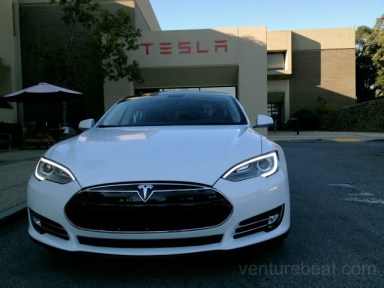 Electric car-maker Tesla’s second vehicle, the Model S, won’t be available until next summer, but the company is taking a version of its new electric sedan out for a little publicity spin with a North American tour.

VentureBeat was among the very first to take the new Tesla Model S Beta for an early test drive, and we can report that it’s a beast. We’ve got photos from our plant visit below, and we’ll be uploading a video soon.

Tesla CEO Elon Musk said the Model S is already sold out for 2012, thanks to 6,500 pre-orders. And after spending some time with the vehicle in person, it’s easy to see why. This car is dead sexy, with all the features to make gadget boy or girl’s heart melt. Yet unlike the earlier Tesla Roadster, it’s actually got room for your friends and family.

With seating for seven (five full-sized adults and two kids in the back), it’s not a vehicle to park in your living room and admire. This is a moving sculpture that expects to be driven.

It handles the hill roads of Palo Alto with the power of a rally car, and the grace of prancing gazelle.  Best of all, it’s muscle you can feel good about. The electric engine is releasing zero emissions as it burns down the road.

What else makes the Model S Beta special? This prototype is in its final stages before the car goes into production, and the Model S will be Tesla’s first mass-produced vehicle. Starting at $49,000, the Model S is the follow-up to the company’s first car, the Tesla Roadster. It will be available in a 160-, 230- or 300-mile range option, and the company says it can charge using any regular electrical outlet.

The Model S Beta has a 17-inch connected touchscreen, developed in-house, that’s equipped with 3G wireless for easy navigation, web and media access, and the ability to run applications.

What we saw was still early, but the Tesla team sees cars as the new app marketplace. That means you can expect someone in the near future to be creating a customized, steampunk-styled interface for someone’s Model S control panel. Even without apps, this giant, luminous screen is responsible for all car functions, and the only physical buttons on the car’s console are the federally-mandated “hazard” blinker, and another button to pop open the glove box. Everything else, from driving directions, to air conditioning, is controlled with the touch screen.

Suffice it to say, no detail was overlooked on the driving experience, the interior or the techy goodness.