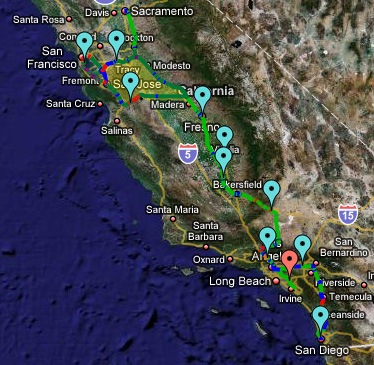 We’ve covered electric sports cars, electric three-wheeled cars and other forms of clean transportation that Silicon Valley investors have been pumping money into over the last several years. But this November, Californians will have a fascinating new transportation option to consider: A high-speed rail network that would connect all of the major urban areas of the state, to be financed in part by a $10 billion voter-approved bond measure.

While there are many issues that may hold up this plan, it is visionary, and could go a long way in keeping California (and Silicon Valley) competitive as one of the largest, most dynamic economies in the world. The bond is pending approval in the state legislature, but looks likely to pass after having gained governor Arnold Schwarzenegger’s support last week.

Trains going as fast as 220mph would run between Sacramento and the Bay Area in the northern part of the state as well as down through the Central Valley to Los Angeles, Orange County and San Diego in the south (map here). You would be able to travel between downtown San Francisco and downtown LA in 2.5 hours for $24, or between San Jose and Sacramento in 1.5 hours for $18, according to the plan’s projections.

It’s hard to calculate the value that a project like this would have in the long run, in the same sense that it was hard to calculate the value of some of the first railroads, highways and major bridges in this state. But it’s easy to imagine a range of benefits for Silicon Valley, and it’s not just a matter of getting local investors and entrepreneurs more easily connected to digital media companies in Hollywood or biotech companies in San Diego.

The train would help Silicon Valley to become more accessible to lower-income and middle-income workers who can no longer afford to live here, people who instead live in Central Valley cities like Stockton or Modesto and spend hours driving back and forth to work in the Bay each day. The planned network includes a series of stops in Central Valley towns.

Then there’s the pollution issue. The agency charged with planning, building and operating the network, the California High-Speed Rail Authority, has (unsurprisingly) rosy projections about how the project will cut back on greenhouse emissions. After implementation — think 2020 or beyond — the network expects to remove 1.4 million cars from the road (saving 10,000 cars from accidents per year), reduce state CO2 emissions by up to 17.6 billion pounds per year and reduce the state’s consumption of oil by up to 22 million barrels per year.

Also, it would supposedly create 450,000 new jobs throughout the state, eventually paying for itself through its revenues. And, an effective high-speed train network could encourage denser, train-focused development plans, not suburban sprawl — thereby promoting regional mass transit systems.

Of course, critics have all sorts of very reasonable retorts. Large-scale mass transit plans tend to go way over budget, then operate at a loss. California also faces budget shortfalls, and could better use the money for other important services like education, health care and basic infrastructure maintenance. More generally, while many concede that cars and planes aren’t going to cover transportation needs in ten or twenty years, they think this money could be better used on beefing up regional train networks.

California’s transportation system is overburdened and falling apart — and yes, that’s an urban issue, as some of the plan’s critics gleefully point out. LA does need a better subway system, and the Bay Area also needs expansion of BART and Caltrain. But if you try driving between the Bay and LA, as I have often done, you’re going to hit traffic well outside of the Bay, well outside of LA, and in random spots of freeway in between. And, oil prices are also only going to go up. The average drive between the two areas already costs — in my experience — at least $60 worth of gas (and I’m not even counting the speeding tickets).

If you try flying between the Bay and LA, as I have also often done, you’ll first of all need to go through baggage checks and the other hassles of flying. Sure, flights are pretty cheap right now, but that’s price warfare that has yet to factor rising plane-fuel prices.

Expanding highways and airports are stop-gap measures that have, to date, proven to be expensive and pollution-heavy — and those efforts won’t scale to handle the state’s still-booming population, expected to grow to 50 million in the next 15 years.

Federal government and private funding sources would provide the rest of the $42 billion projected cost of a high-speed, electricity-powered train network (a project that has in past years struggled to get even basic funding). Some studies suggest that expanding highways and airports will end up costing twice that — not to mention the congestion and pollution problems they’ll add.

Other critics also say that California is too much of a car culture, that people just won’t want to take the train. Well, there’s already evidence against that. The “Capital Corridor” Amtrak line connecting Sacramento and the Bay has been booming in ridership over the last several years, recently rising to a new record of more than 1.5 million riders a month. The same trend is happening on other inter-city tracks, including the Pacific Surfliner line connecting San Diego and LA, and the San Joaquin line, which connects the Central Valley with Sacramento and the Bay.

While no inter-state high-speed rail has yet been seriously proposed, it’s worth noting the Amtrak Cascade line that connects California with Oregon and Washington has also hit record ridership numbers. And, on the east coast, the Acela line that connects Boston, New York and Philadelphia has also been showing meaningful growth.

As with global warming, California is ready to start working with foreign countries to solve major problems like transit, regardless of what the rest of the country wants to do. It has most recently signed a rail technology sharing agreement with France — no doubt, France is looking at getting some of its successful high-speed rail companies some work here.

If you support California High-Speed Rail, check out the Facebook support group here and this blog. If you don’t, tell me why in the comments.