It may not be much to look at, but CherryPal’s new device — a $249 paperback-sized box containing an underpowered processor and a token amount of memory — is a forerunner of the oncoming revolution in “cloud” computing.

You just stick in any keyboard or mouse with a USB connector and any standard monitor (VGA), and you’re up and running.

Of course, being one of the first to do something doesn’t equate to being successful at it. But the CherryPal should excite anyone who believes that the average computer of the future will not only be Internet-connected, but also Internet-controlled. The CherryPal, set to begin shipping at the end of this month, is a true cloud computer, meaning almost all if its applications and data are stored online.

A cloud computer is desirable for a few reasons. One is that small chips like the CherryPal’s 400 MHz Freescale processor can handle more tasks with the help of an outside server. Individual devices almost never need upgrades, and are harder to infect with viruses. Upgrades are also possible without replacing the computer, and files are accessible from anywhere. And the CherryPal requires only two watts to run, much less than a normal computer.

Those reasons are why CherryPal hopes its device can rise past the more powerful competition to win a spot in the hearts of consumers. CEO Max Seybold says he hopes that students and less computer-savvy people will latch onto CherryPal as an alternative to traditional computers.

Computing experts will likely suggest that it’s most useful as a secondary device to a home desktop or laptop. That’s probably true for you or I, but a substantial population of people who don’t care about computing power may be perfectly satisfied using only a CherryPal. However, there’s a wide array of competition awaiting the new device. 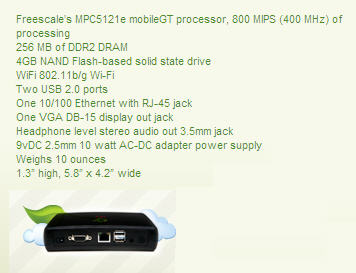 Among them are companies like Apple, with its Mac Mini, and Shuttle, which sells the KPC starting at $229. There’s also Zonbu, which has a “hybrid” system that goes partway toward cloud computing for $299 — although getting all the features of the cloud requires an extra subscription fee, while CherryPal’s is free.

CherryPal plans to market its device as being both simpler to operate than other computers and, because of its light construction and low energy use, as a “green” computer. However, it’s also not the first to use that approach. Wal-Mart said the same about its Everex gPC, which runs a version of Linux customized to hook up to Google Apps. Despite quickly selling out of its first run of 10,000 computers, Wal-Mart was dissatisfied with the results and stopped offering it in stores. It still sells the gPC online, for $150.

And for computer manufacturers, the CherryPal presents a whole different set of problems. Mike Bryars, a global manager at Freescale, says his company will do well selling chips for “embedded” computing. “Traditional PCs are great for productivity, but they’re not optimal devices. Why do people buy iPods when they can listen to MP3s on a laptop? At the end of the day, it’s a better device,” he says.

Computer makers like Dell won’t be pleased with the idea of having a device for each application, when they want to sell expensive, full-featured systems instead; smaller devices are generally assumed to offer lower margins. However, when I asked Seybold whether his company could survive without hitting its target of hundreds of thousands to millions of units sold, he said that it could still turn a profit on “ridiculously few” units sold if necessary.

CherryPal, based in Mountain View, Calif., raised its funding outside the US. It has taken over $5 million so far, from a Hong Kong-based private equity firm called Tristate and a group of angels in the United Kingdom.