When we talk about concentrating photovoltaics (CPV), it’s the lenses, mirrors and tracking systems that focus sunlight onto solar cells that get all the attention. But why not the cells themselves? A little-discussed handicap in CPV is the near-monopoly two public companies, Boeing’s (BA) Spectrolab and Emcore (EMKR), enjoy on high-efficiency cells.

That’s starkly different from the other solar markets, in which dozens of startups are vying for attention. One reason the two companies reign uncontested is that the market for their expensive cells, which can capture over 30 percent of the sunlight that hits them, is very small. But Cyrium Technologies, with $15 million in new funding, hopes to break the status quo and, in the process help the CPV market to expand.

At the moment there’s not a lot separating Emcore and Spectrolab. Both companies occasionally put out press releases touting record-breaking efficiencies, but those milestones are achieved in labs, not manufacturing lines. What’s actually sold are cells that average 37 percent efficiency (although anecdotal reports suggest their real performance is around 34 percent). Both companies have struggled to do any better with efficiency, and prices have likewise stayed high.

That’s not a huge problem for CPV companies like SolFocus, because the biggest cost is in all the lenses, trackers and so forth that make up concentrating solar units, and the technology is still new. However, many CPV systems are now at a point where they compare favorably to regular solar panels. As a new technology, they could use a competitive advantage to help convince buyers, and lift their own profit margins. Cyrium thinks it can provide that edge.

Cyrium’s innovation is changing a time-tested portion of the cells Emcore and Spectrolab use. The photovoltaics in question go by the geeky designation of III-V, triple-junction cells. That means they’re built with three layers that work a bit like a sieve with progressively smaller holes. The top layer captures ultraviolet light, the middle takes in visible light, and the bottom grabs the remaining infrared spectrum.

The middle layer is what has held up further development, according to Cyrium’s CEO, Steve Eglash. It captures less light than the other two, and further development has been slow. Cyrium was founded by Simon Fafard, now the company’s CTO, around the idea of embedding nano-scale amounts of a material called indium arsenide within that layer of the cell (also called quantum dotting). 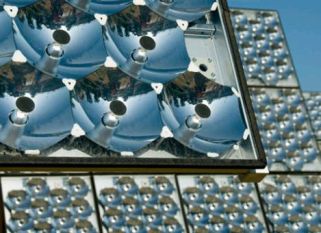 Eglash says the technique will boost his company’s first line of solar cells to around 41 percent efficiency, which can milk out 10 percent more energy from a CPV system. That’s a large and important gain, especially if the CPV technology in question is already competitive with other forms of solar power.

Cyrium hasn’t gotten to that efficiency yet, but Eglash says its initial partners are already reporting comparable output to Spectrolab cells, and development is far from done. And interest in the finished product is running high: “Out of the 25-30 concentrated photovoltaic companies out there, nearly every single one has reached out and asked if they can please work with us,” Eglash says.

Also on the books is a reduction in cost, but there, Cyrium’s competitors are on a more even footing with it. Eglash says his company will benefit from a fabless (outsourced) manufacturing model, which Spectrolab and Emcore don’t use, but prices will remain high from now, only falling gradually over time.

The funding for Cyrium is its second so far, and was for $15 million. Quercus Trust led, and was joined by previous investors BDC, Chyrsalix and Pangaea Ventures. It also recently received some funding from Sustainable Technology Development Canada, and its first round was for $3 million. Cyrium is headquartered in Ontario, Canada with an office, headed by Eglash, in Sunnyvale, California.