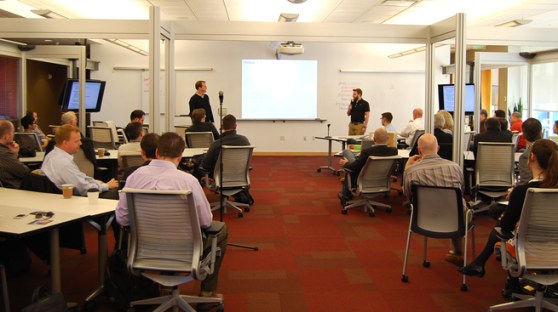 KANSAS CITY — On the day before Thanksgiving, offices slow down and attendance dwindles. Not at 1 Million Cups (1MC), the most popular weekly startup event in Kansas City. Today, there are more than 80 people here ready to hear pitches and connect with other entrepreneurs.

1MC is held every Wednesday morning for one hour at the Kauffman Foundation, the massive not-for-profit organization that created the event. The goal of the event to help foster a community of entrepreneurship, and it has quickly grown. It began in April of this year with 12 people attending. Last week, it attracted 145.

“A lot of our growth was fueled by word-of-mouth,” Nate Olson, an analyst at the Kauffman Foundation who helped get 1 Million Cups off the ground, told me. “The people that would attend to pitch would keep coming back to hear people pitch during the following weeks.”

The unusual name “1 Million Cups” derives from the idea that it takes one million cups of coffee to build an active community of startups. Kansas City is clearly not San Francisco, New York, or Boulder, but the Kauffman Foundation wants KC to be a premier destination for tech and startups in the Midwest.

The format is simple: Two startups pitch every each morning for six minutes and then each conduct a 20-minute question-and-answer session. The final minutes of the event are for networking.

The two startups pitching today at Umzuzu, a Google Apps reseller and support provider, and Riega Foods, a company that sells specialty and gluten-free food products at about 2,000 stores in the U.S. Watching these two companies pitch, the mood here is relaxed and the questions asked by the group are of a high-quality.

“1 Million Cups is an integral part of the entrepreneurial community in Kansas City,” Bryan Azorsky, a web designer who has been attending 1 Million Cups for the past five months. “I’ve helped spread the word to lots of people. Sometimes I’m surrounded by people I’ve invited.”

Olson said that the next step for 1 Million Cups is bringing it to other cities. Right now, the Kauffman Foundation is hosting 1 Million Cups in Des Moines, Ia., where it launched last week in a coffee shop and attracted 12 people.

The Kauffman Foundation has plans to launch 1 Million Cups in another 18 cities in the next year. Cities that will get the program have not been finalized, but Olson said it will start in the Midwest and then grow out to other part of the U.S. Likely locations include St. Louis, Omaha, Cedar Rapids, Ia., Lincoln, Neb., Atlanta, and Phoenix.

“We’re really interested in helping cities build a vibrant startup community,” Olson said. “Being an entrepreneur can be a lonely journey. But people come here and find like-minds. A couple months ago, someone said that they quit their job to work full-time on their startup and everyone clapped. This is the only group in Kansas City that would clap for leaving your job and chasing your dream.”