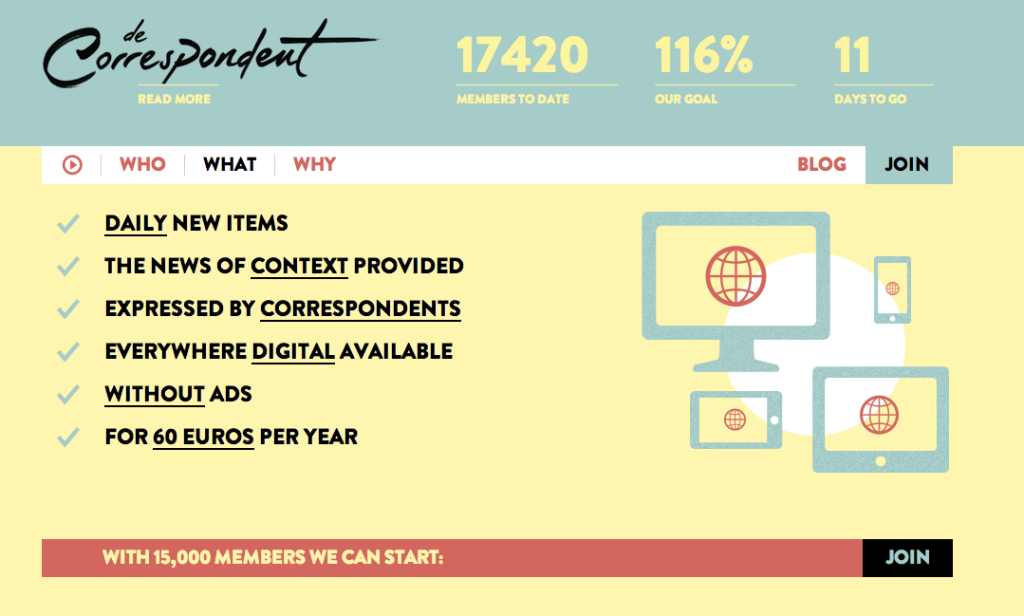 Journalists are frequently caught between demands for speed and scoops and the desire to create high-quality, thoughtful content, and this issue extends far beyond Silicon Valley.

A Dutch journalist named Rob Wijnberg has raised $1.3 million to launch a digital news site called De Correspondent that will focuses on context and quality content, rather than the hustle of the breaking news cycle. He pitched the project on Dutch national television in mid-March and in just over a week, achieved his goal of 15,000 subscribers and raised over a million dollars through crowdfunding.

Wijnberg formerly served as editor in chief of a daily newspaper called NRC Next the targeted young adults. Harvard’s Nieman Journalism Lab interviewed Wijnberg, who said he will work with individual correspondents who determine the news agenda based on what they think is important and relevant, rather than breaking news. His translated, ten-item manifesto reads:

This sounds a lot like Twitter founder Ev William’s current endeavor Medium, which he founded to address some of the pitfalls he saw in online journalism.

“It’s not too late to rethink how online publishing works and build a system optimized for quality, rather than popularity,” he said in a blog post.  “Where anyone can have a voice but where one has to earn the right to your attention. A system where people work together to make a difference, rather than merely compete for validation and recognition. A world where thought and craftsmanship is rewarded more than knee-jerk reactions.”

Before starting De Correspondent, Wijnberg wrote a book about the current state of news media where he said ” “I don’t believe in ‘the news’ in the objective sense of the word. You can describe the world in infinite ways, and ‘the news’ happens to be one of them.”

The publication is still in its nascent form and it is unclear what it will look like. However, a community of more than 17,000 people are willing to pay 60 euros a year to this type of digital journalism. While the Internet has powerful abilities of breaking and distributing news, digital publications from San Francisco to Amsterdam have struggled to find stay on top of the constant churn, while also keeping readers informed, and building successful business models. At least in the Netherlands, they have space cake.