Generally speaking, the paychecks for tech workers in places like Silicon Valley, Seattle, and New York continue to be vastly larger than the paychecks of workers located outside of a major tech hub, even when adjusted for cost of living. However, there are signs that as the cost of living continues to rise in these places, wages may not be able to rise with them.

According to a survey from tech hiring platform Dice, of 10,705 tech workers in the U.S., Silicon Valley offered the highest average wage for tech workers in 2017. Respondents who worked in tech in Silicon Valley reported an average salary of $114,654 for the year. The cities with respondents reporting the next-highest wages were, in order: Boston, New York, San Diego, and Washington, and D.C/Baltimore. 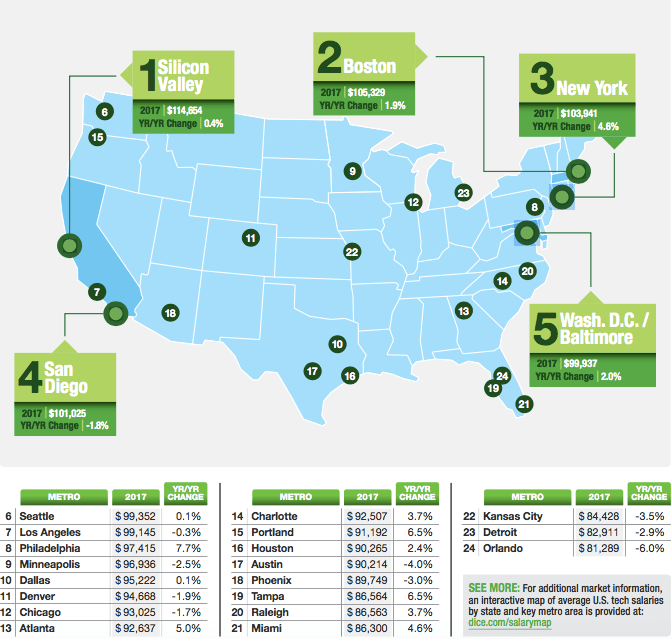 On the flip side, many places where tech wages are seeing the highest levels of growth are the areas that aren’t typically thought of as tech hubs in the U.S. The average tech salary in Philadelphia grew by 7.7 percent from 2016 to 2017, while wages in Portland and Tampa grew by 6.5 percent.

Even with that burst of growth, Philadelphia respondents reported an average wage of $97,415 — nearly $17,000 less than the average wage in Silicon Valley. And there’s no sign that the growth will continue — according to Dice, the average tech salary in Philadelphia declined by 5 percent from 2015 to 2016. There are a couple of possible explanations for this year’s increase — one is that more high-paying jobs were added in Philadelphia last year as tech startups in the area have grown. There’s also a possibility that this increase was driven by more tech professionals working remotely from Philadelphia.

“As more companies consider offering the ability to telecommute, Philly is a less expensive option where tech talent may be able to swing working at a company with headquarters in the New York Tri-State area and a home office in Philadelphia,” said Durney.

“Not all employers can compete on pay, especially in hot markets like Silicon Valley, Seattle, or New York,” Dice EVP George McFerran wrote in the report. “For those companies who might not be the cool kid on the block, other factors like good benefits, challenging projects, and flexible work schedules can be as rewarding as compensation to tech pros.”