For all of the complexity in the world of open source, there are just three viable models for building a successful startup on top of an open-source project.

It’s been a crazy time in open source. We’ve seen a lot of news flow from established software companies changing their licensing terms — some to be more open, some to be less. Then there were the blockbuster deals like Salesforce’s $6.5 billion purchase of MuleSoft or the eye-watering $34 billion acquisition of RedHat by IBM.

Founders might be wondering whether there’s still space for new open-source software companies among all of these heavy hitters.

The answer is yes. As an investor, I have a front-line perspective on the many successful attempts to turn open-source projects into successful software startups. Startups actually have an advantage these days because they can learn from what’s worked and what hasn’t when it comes to commercializing open-source software.

Looking at the successes, I’ve identified three proven paths from project to commercial success. Here’s a look at these models and the successful companies associated with each.

This model represents cases where a big institution (company or university) develops an open-source project, gives it to an established foundation, and the founders leave the first institution to start a company around it. I call it “institutional” because the codebase goes from a founding institution to a governing institution.

This is a proven path for companies. The founding institution funds the growth of the project and provides a marketing halo. The founders launch a startup after the open-source project is validated while still keeping the founder halo and/or the governing institution halo. The downside to this approach is that you don’t control the core code and can face commercial tension working with the governing foundations. 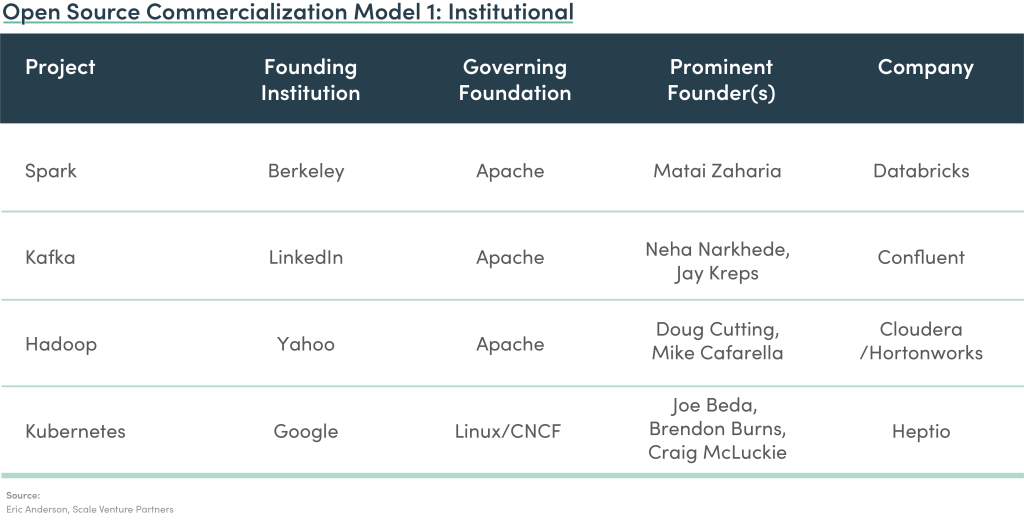 This model represents cases in which founders create an open-source project on their own or with venture backing. This is the high-risk/high-return model. It has the advantage of retaining the control that can be lost from placing the project with a governing institution. It can also be a lot of work bootstrapping a project, but if it works, you retain control of the codebase and own the brand/trademarks of the company and project.

Most of the examples in the table below have changed open-source licensing in the last year or so, something that can’t be done for foundation-donated code. All of these projects have named their company the same as the project, which isn’t true of the Institutional examples above. It can be hard to build the brand as you don’t have the halo of the founding institution. But once you do, it is all yours. 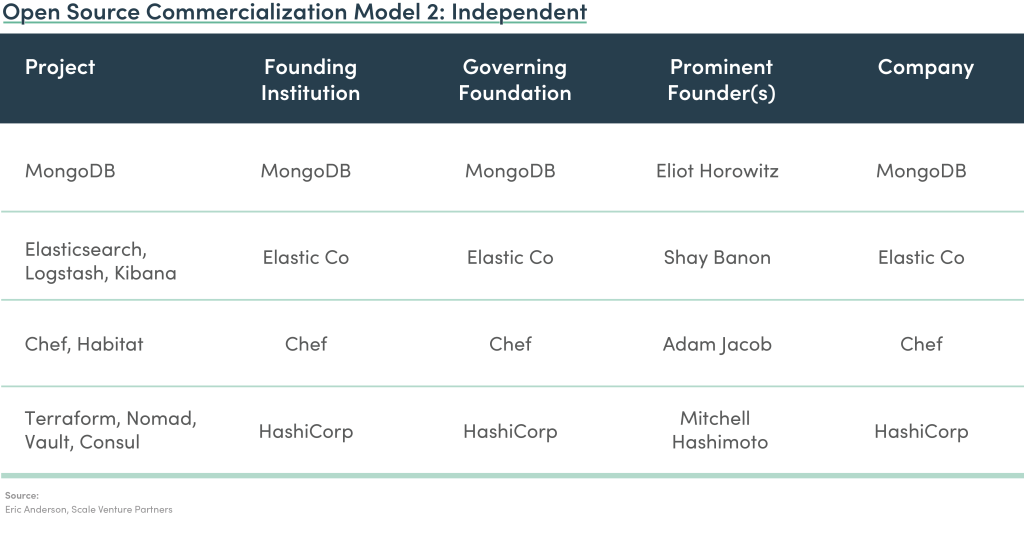 *In many cases the first releases of the projects in the table above came before a company formed, but the company is the closest thing to the founding institution. Also, in many cases companies changed names between formation and today, but we’ll use today’s names for consistency.

(Disclosure: My firm is an investor in Chef.)

This model represents the many cases of companies co-opting an existing open-source project. Even if you haven’t created an open-source project, you can create a company around one. This is a newer model that is less proven but certainly promising.

There are a bunch of great open-source communities in which, for whatever reason, the founders aren’t in a position to or interested in pursuing commercial development. Here, you don’t get any halos, but you are able to skip the work of building a community — just join a thriving one and commercialize it.

I’m curious to watch how these companies play out. The founder halo is extremely valuable in commercializing something that is otherwise already free, but cloud and SaaS models give additional opportunity to extend value. 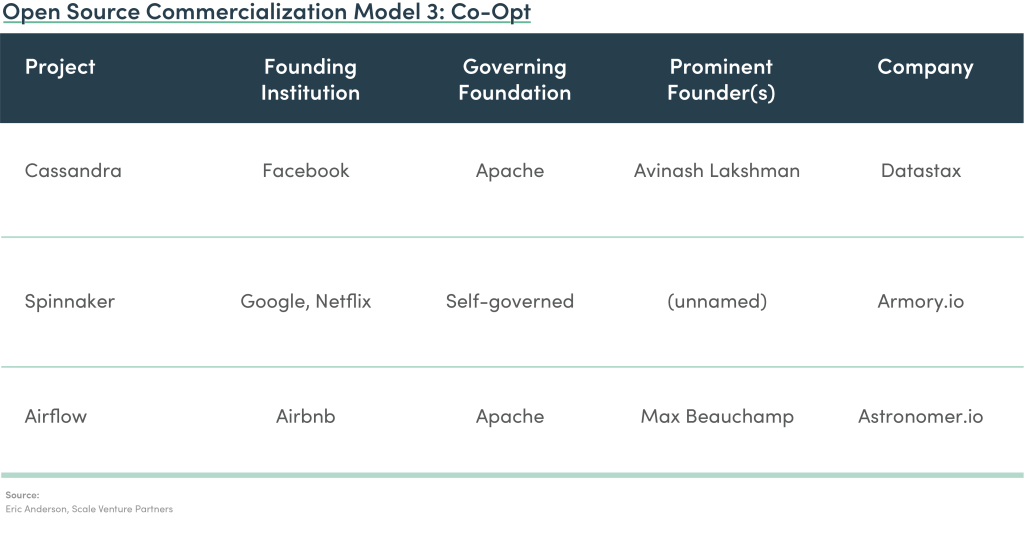 Open source has fostered many successes

No one said that wearing the two hats of project founder and CEO would be easy. There is endless tension between the democratic spirit of open source and the many attempts to build successful companies on open-source projects.

Yet just look to MongoDB or Cloudera to see that it is indeed possible to turn open source into commercial success. As a founder, it’s important when starting out to be crystal clear about which of these proven paths to success you’ll pursue.

Eric Anderson is a Principal at Scale Venture Partners, where he invests in cloud infrastructure and open source.