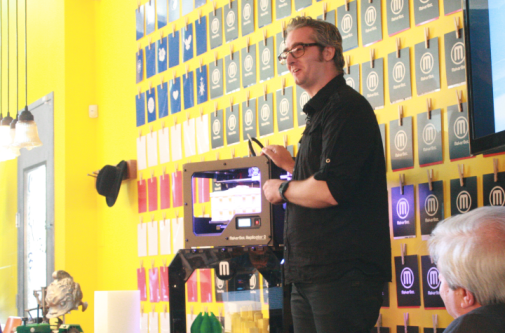 The move is a smart one for Stratasys, which specializes in large-scale industrial 3D printing, not the consumer sector that MakerBot has come to represent. Stratasys says that its acquisition is “expected to drive faster adoption of desktop 3D printing.”

The deal, which is worth over $600 million, consists of $403 million in stock as well as an additional $201 million in “performance-based earn-outs.”

The news comes a few weeks after we reported the initial rumors about a possible acquisition. While both Stratasys and rival 3D printing company 3D Systems seemed like pretty obvious suitors for MakerBot, it didn’t seem likely at the time that MakerBot would actually end up agreeing to a deal. But that’s exactly what it did.

Fortunately, MakerBot says it will continue to operate as an independent company, which makes sense given the brand power the CEO Bre Pettis and his team have amassed over the past few years. Since launching in 2009, MakerBot has sold 22,000 3D printers, the latest of which is the Replicator 2.

MakerBot also noted that it pulled in $11.5 million in  revenue during the first quarter, compared to $15.7 million for all of last year.

“We have an aggressive model for growth, and partnering with Stratasys will allow us to supercharge our mission to empower individuals to make things using a MakerBot, and allow us to bring 3D technology to more people,” Pettis said in a statement