Second quarter venture investment in Texas once again reflected a common trend: Austin nabbed the most amount of investment dollars while Dallas and Houston trailed (significantly) behind.

Venture capitalists pumped $385.9 million into Austin startups across 40 deals in the second quarter, according to Crunchbase data. Dallas companies raised $142.2 million in 16 deals in the same time period while Houston startups brought in $42.1 million across eight transactions. A lone investment was made in San Antonio during the second quarter, valued at $1.1 million.

For the state as a whole, dollar values are way up (24 percent year over year) even though the actual number of deals is down (43.48 percent) – signaling larger investment sizes. 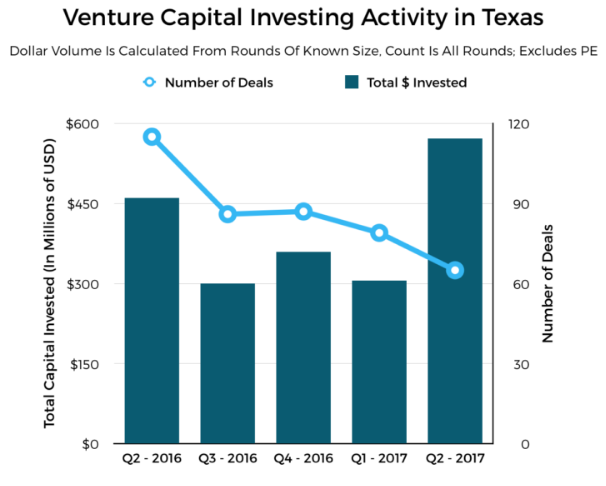 For Austin, the second quarter validated what a number of VCs observed after thefirst quarter’s relatively weak showing: that the Texas capital’s venture capital scene is still going strong. The most recent quarter was the strongest for Austin over the past several. Contrasting the above-listed numbers, in the first three months of 2017, 25 Austin startups raised just $139.7 million.

Charlie Plauche, principal of Austin-based S3 Ventures, told Crunchbase News that Austin saw a number of rounds during the second quarter that were $20 to $30 million or more.

Illustrating that point, one of Austin’s largest deals was SparkCognition’s $32.5 million Series B raise. The company describes itself as an AI-driven cognitive analytics company. Meanwhile, Austin-based real estate startup Opcity raised $27 million in a Series A round. “It was much stronger than the first quarter,” Plauche said. “We had a slow start in the first quarter, but that was not indicative of the strong deal flow happening in Austin and across Texas.” 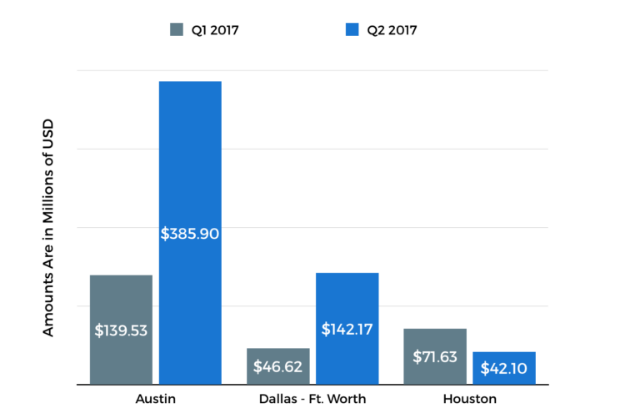 Tom Ball, founder and Managing Director of Austin-based Next Coast Ventures, observed a higher-than-usual percentage of earlier seed-stage deals looking to raise capital during the quarter. “We’re hoping that translates into the start of more companies,” he told Crunchbase News.

One trend Plauche noticed in Austin was the wide range of sectors receiving funding. Traditionally, Austin has a long history of funding enterprise SaaS startups.

However, the city “has recently seen strong investment in food and beverage, pharma, consumer, med-device, robotics, and other sectors,” Plauche pointed out.

And like many other startups being funding in 2017, a number of Austin deals during the quarter had some kind of artificial intelligence component, noted Ball. There were also a few companies that were either healthcare-related or healthcare-IT related, he pointed out. “We’re not sure if the [new] Dell Medical School is creating this increase, but we saw a lot of unique things that we took hard looks at – and are still looking at,” he said.

As for AI, Ball thinks maybe the fascination with it has “maybe tipped too far, where companies are touting it a not realistic way.”

“They are either utilizing technology or applying AI-like applications to things that don’t necessarily need it,” he said.

For its part, S3 made seven portfolio follow-on investments in Q2, which were primarily in Austin-based software companies. It also made one new investment, co-leading a $9 million Series A round for Austin-based Acessa Health. Acessa, which is run by CEO Kim Bridges, manufactures an FDA-approved device that provides a minimally invasive way to treat fibroids in women. In 2016, S3 invested over $55 million into Texas companies and is on pace to pass that total in 2017.

Meanwhile, Next Coast Ventures invested in a total of five Austin companies during the second quarter, and one with headquarters outside of Austin. It led a new investment in LeanDNA, a SaaS company focused on the manufacturing industry, as well as an investment in ScaleFactor, a SaaS company out of Techstars that is focused on the SMB finance and accounting function.

Looking ahead, Plauche believes VC investment activity in Austin will continue to be strong throughout 2017.

Ball agrees. “We continue to be excited about the amount of entrepreneurial activity in the state’s capitol and Texas as a whole,” he said. “We also continue to see firms from the West and East Coast show up in town to look at deals with us, which we think is a very positive indicator for the health of Austin’s early-stage tech community.”

Such optimism is easy to hold when the Nasdaq is near record highs and employment is strong. However, if the greater market slips, such optimism may be harder to hold on to.

Dallas is not as hot as you might think

Stephen Hays, managing partner of Dallas-based Deep Space Ventures, is realistic about the fact that his home city is simply not known for its hot startup scene.

“We lack the investment dollars that Austin has,” he said. “We also lack the founders who have made exits and then become part of the city’s angel community to fill the city’s early-stage funding gap. But we do have a lot of little pockets of great stuff going on.”

Like Austin, Dallas has predominantly been home to B2B enterprise software startups. “There’s a lot of Fortune 500 companies located here and in the state as a whole,” Hays pointed out. “So these startups’ customer base is here in the state. It’s efficient to operate right next to your customers.”

However, one of the companies that raised the most in Dallas during the quarter was actually health-care related. In May, biotech startup Lantern Pharma Inc.brought in $3.7 million in Series A funding.

But in general startups seeking early stage funding in Dallas have a tough time, Hays admitted.

“It’s not like Austin where you have a bunch of angel investors writing $25,000 to $50,000 checks,” he said. “That’s something this ecosystem lacks. But there’s a lot of really cool companies with some really great stuff going on. If we could just build up our ecosystem in terms of both the quality and quantity of startups and investors, I think that would make a big difference.”

Although Houston is the largest of all Texas cities, it trailed behind Austin and Dallas when it came to VC funding in the second quarter. 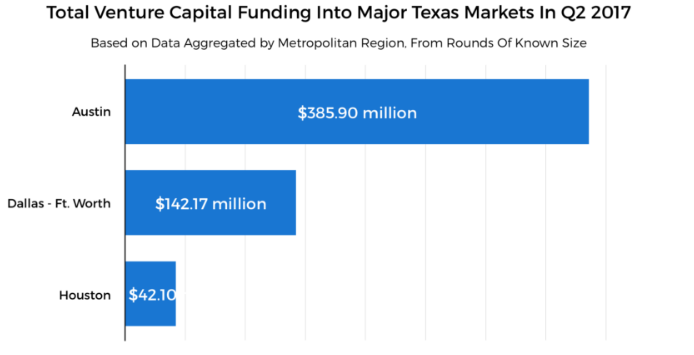 Blair Garrou, managing director of Houston-based Mercury Fund, noted that Houston saw a fairly significant drop in VC investment during the second quarter. Houston startups brought in $42.1 million across eight transactions during the three-month period compared to $79.5 million raised by 18 companies in last year’s second quarter, according to Crunchbase data.

“There are a number of seed deals in Houston that are in the process of scaling, having been incubated at Station Houston and TMCx, but aren’t quite at the level of Series A investment,” he said. “That should change over the next few quarters.”

One company that brought in a good portion of Houston’s total raise was Riversand Technologies, a Master Data Management (MDM) company that raised $35 million in a Series A round led by Crestline Investors that was announced in June.

Traditionally, Houston is known for its dominant oil and gas sector. But lately it’s been growing stronger in Industrial IoT companies, Garrou noted. Many of them are data science platforms providing products to a wide variety of industrial companies, including oil and gas utilities.

While Mercury Fund was active during the quarter, just two of its 14 investments were made in Houston-based companies. Specifically, Mercury Fund invested in Graylog, an open source log management platform, and Ambyint, a cloud-based data science platform for managing oil and gas wells.

Despite the second quarter slump, Garrou is optimistic about what’s ahead for Houston and the rest of the state.

“We expect venture activity to pick up in Houston, and continue increasing in Texas and throughout the Midcontinent,” he said.

So for yet another quarter, Austin reigns as the startup capital of Texas. Although smaller than Dallas and Houston in size and population, it gets far more investment dollars and is home to more startups. And it doesn’t look like that’s going to change anytime soon.