After five months of toiling 14-hour days, making a hardware IoT product from scratch and spending thousands of dollars of Other People’s Money, I and my two cofounders woke up with a jolt.

It suddenly dawned to us that our product would not sell. And unless we did something about it, the startup was doomed. This was December 2014.

Dreamy-eyed noobs that we were, we made tons of mistakes. I hope this post helps you avoid some of those mistakes because as much as we glorify failure in the startup world, it does hurt. A lot.

Let me back-track a few months to give you some background. In July, we started building smart internet connected switches that learn from user behavior and automate all the electronic appliances in a home.

We felt that it’s a pity that our search results and news feed are personalized to us but our homes, where we spend most of our time, are not.

We had a vision that our switches will learn and personalize the electronic appliances in a home to its owner. We decided to name the company Lumos.(Yes, I am a big Harry Potter Fan!)

We took some pre-seed investment from an angel investor and headed off to our alma mater IIT Gandhinagar to get incubated. We converted a lab into our office space and the Lumos saga started!

Above: The Lumos Team at work!

We built like crazy. That’s the thing about us engineers; if you give us something interesting to build, we will forget everything else and just build. Our first prototype, which automated lights, was ready in 45 days.

The second prototype, which could automate lights, fans, ACs and water heaters was out in another month. This is really fast according to hardware standards.

Above: The first PCB built by Lumos.

In mid-November, we got a product designer on board to design the final product. In December, we were already in talks with investors to raise the next round of funding.

We were wildly wrong about the price at which we thought our product would sell. And when all this realization came together, shit got real.

We were forced into a deathly spiral of pivots that almost killed the company. We made bigger mistakes. We left IoT as a sector. We lost a cofounder on the way. The pivots are a long story. I’ll save it for another day.

Now that you have some background, here are the top 5 mistakes we made in Lumos and what we learned from them.

Mistake 1: We were neither experts nor target users of the product that we were building.

We had never used the existing home automation products in our homes. We were not experts in the IoT sector. When you are new at something, you give yourself the famous Dunning Kruger pass on your decisions.

Definition care of Wikepedia: “The Dunning–Kruger effect is a cognitive bias wherein unskilled individuals suffer from illusory superiority, mistakenly assessing their ability to be much higher than is accurate. 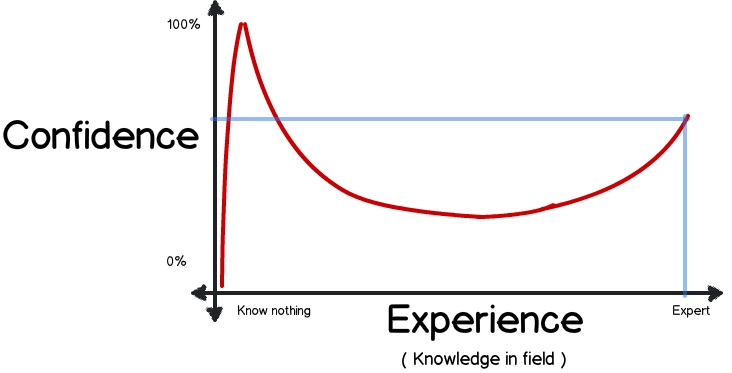 Above: The Dunning-Kruger effect.

By avoiding this mistake, you can avoid a lot of other mistakes that happen as a result of this one.

Lesson: Work on something where you are either an expert or a top user. If not, become an expert/top user. Homejoy founder Adora Cheung, for example, worked as a professional cleaner to understand the business.

Mistake 2: We did not do the due diligence on the idea before we started building the product.

We did not understand the market and competition well enough. We also did not figure out the persona of our customer — and whether that customer was looking for the value that we were providing.

We did not question whether we would be able to provide that value in the first place.(Machine Learning cannot read the human mind. Not yet!).

It is always possible to validate or invalidate a lot of assumptions about the product, market, and competition without building the full-fledged product.

One way we could have done it was by selling existing products to our potential customers.

Lesson: I learned this very useful method in an accelerator. Make a thorough list of hinge-breaking assumptions for your market, product, and competition. Hinge breaking assumptions are those that can make or break your company. Rank them according to probability of the assumption being wrong and of subsequent risk to the company. Start validating from the top while building as little as possible.

Mistake 3: We let sunk-cost bias affect our decisions about pivoting.

It was not that we were clueless about the problems in our product. We had doubts in our minds. In a startup, you almost always have doubts. But we had built so much. We were in love with our product. And we were not ready to ask the difficult questions.

Is it okay to be doubtful about your product? Is it okay to voice your doubts and bring the team morale down? Or make your cofounders feel that you are not as committed to the idea and the vision as they are? It helps to be transparent about your doubts with cofounders in the long run. It would have saved us a couple of months and some money.

Lesson: It is absolutely necessary for founders to be committed to the vision of the company. However, there are multiple ways to achieve a vision. Don’t fall in love with one way. Accept the possibility that you might have to start things over from scratch.

Build a culture of transparency in your company. Encourage dissent among cofounders and deal with it objectively.

Mistake 4: We were trying to do everything for everybody.

We were making switches that could automate your lights, fans, ACs and water heaters. We would have tried to automate your TV, fridge, oven and car as well had it been feasible to do so.

We were pitching power savings as well as luxury. This made the product and the pitch very complicated.

Lesson: As a startup, your resources are limited. So it is always better to identify and solve one problem very well instead of solving numerous problems in a so-so way.

Pebble, with all its Kickstarter success, is still in troubled waters.

Building a prototype is the easiest part of building a hardware startup. The real challenge comes in product design, production engineering, manufacturing, distribution, and marketing/sales. And you need to have friends in China.

Also, hardware product validation and iteration cycles are much longer than software ones. Getting funding is relatively difficult; VCs ask for traction (~$1 million on Kickstarter/Indiegogo last I heard) because of the inherent risk in a hardware startup.

Managing cash flow is hard because you have to pay your vendors months before you get paid by your customers.

Considering all this, we were not the right team to build a hardware company.

Lesson: Understand what you are getting into if you are starting a hardware company and plan accordingly. Get experienced people on your team or get into a hardware accelerator like HAXLR8R.

Eventually, we ended up leaving hardware and IoT and decided to build something that solves a problem we had experienced.

Since Gandhinagar (where we’re based) does not have many startups, interacting and sharing experiences with other entrepreneurs was always a big problem for us. Also, we had to subscribe to a lot of blogs (crowded inbox) just to stay updated with top content on entrepreneurship. We decided to build a solution to this problem — FundaMine, a community to help professionals interact with others in their profession. Currently, we have communities on entrepreneurship, product management, Android dev, and IoT.

If you enjoyed this post, check out this story on IoT startups from last week: Entrepreneurs: Beware of pursuing the next big thing [cough] IoT [cough].

Yash Kotak is cofounder of FundaMine, based in Bangalore, India. You can reach him at yashpkotak@gmail.com or follow him at @YashPKotak.