(Editor’s note: Stuart Wall is co-founder and CEO of Signpost. He submitted this story to VentureBeat.)

Despite the rocky nature of the stock market these days, it sure seems like a great time to start a company. 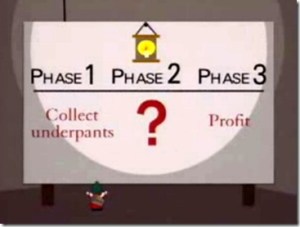 The stories of early stage founders graduating from Y Combinator and TechStars with $8-$10 million pre-money valuations soon after graduation are encouraging. And late stage valuations appear to be equally generous, with LinkedIn trading at a 554x P/E multiple on the day of their IPO.

These seemingly outsized returns are attracting a new group of aspiring entrepreneurs, who often leave MBA programs and business careers to try their luck at a startup. I was one of those people last year, leaving a private equity job to start a consumer-facing company. Here’s some of what I’ve learned in making that transition.

Customers normally aren’t free – We spend most of our days using products that have experienced extraordinary viral growth. Facebook, Twitter, Foursquare and more recently, Turntable.fm. These businesses inspire a disproportionate number of startup ideas that rely on viral adoption to justify a low or unknown customer value.

You undervalue disciplines that you don’t understand – Despite a significant number of blogs on the topic, an alarming number of initial discussions with first-time founders go as follows (brackets for my interpretation):  “I’m going find a [horrible] computer programmer in the next few weeks. I’ll ask them to do all the [product, design and] coding work based on some PowerPoint slides I made. I think I can negotiate a [unfair equity] contract, then hire more programmers after I get funding [because of the product the first one built].”

I’m using hyperbole, of course, but my main concern is that business founders rarely allocate enough resources behind tech, product or visual/UX/UI design. It’s not because we’re dumb, it’s just that many barely understand the complexity of coding and product development.

If this sounds like you, remove “normally” from the previous lesson. You will certainly pay for customers. Non-tech/product founders who aspire to create a viral consumer facing web property are like tennis players trying to win an NBA championship.

Don’t worry about people stealing your idea – Teams without execution experience often assume the first person with a great idea is almost certain to succeed. The lack of focus on execution reminds me of the SouthPark episode on underpants gnomes: Phase 1: Great idea -> Phase 2: ?? -> Phase 3: Profit!!

By the time Facebook launched in 2004, Friendster, a competing service, already had 3M users – roughly the same number as Foursquare in Q4 ’10. Friendster’s success drove scores of copycats. Like Facebook, most category killers weren’t the first to execute an idea; they were the ones who executed better than anyone else.

Put your business plan on SlideShare. Present at Meetups. Tell potential co-founders what you’re doing, get them excited about it, and learn from their feedback. If you do succeed, it’s unlikely to be repeatable anyway.

You won’t get it right on your first try – Unless you’re copying a proven business model, you probably don’t know who your customers are, what they want, or what they will pay for. It’s nearly impossible to answer these questions with research. The best tool for most consumer startups involves rolling up your sleeves and building something ugly, seeing how people use it, making it better, then repeating the process.

Many new founders seem to pursue a zero iteration strategy. This often involves hiring a contractor to design or code a site that won’t care if something breaks, let alone execute another turn. When things don’t go well at launch, the inability to iterate leads to businesses untimely demise.

Don’t be discouraged by FOMO (fear of missing out) – The newness of a company can be deemed press worthy. Postabon, a tiny bootstrapped startup that I built part-time, was named in “The 10 Companies That Will Matter in 2010” by PC World. It was a distinction we shared with Google Wave.

The average startup isn’t able to capture the full value of PR via sticky traffic, subscriptions or revenue. PR can be a cheap way to identify leaks in your product; just don’t seek more water at the expense of fixing the bucket.