The story of Cleveland’s long decline and nascent recovery is a well-worn one. Lately, the city has latched onto a local sports team’s slogan to brand its comeback: “Believeland.” This optimism is, in part, well-merited. Last year, the Cleveland Cavaliers won their first-ever championship, the city prepared for and successfully hosted the Republican National Convention, and local tech entrepreneurs birthed Ohio’s first unicorn.

Cities across the Midwest are writing similar chapters, under their own comeback banners; from Pittsburgh (“Mighty Beautiful“) to Detroit (“America’s Great Comeback City“), stories of Rust Belt revival abound. At the same time, concentrated poverty and economic polarization remain huge challenges in these cities. None of them are achieving inclusive economic growth — the elusive gold standard of a vibrant, thriving, sustainable economy. In a recent POV article in CityLab, Richey Piiparinen of the Center for Population Dynamics at Cleveland State University cites the risk in the city’s comeback story: a scenario in which “new economy” neighborhoods amass wealth while others stagnate or decline.

Are these cities really something to believe in? They may be — if we can collectively find a way to connect economic opportunity with historically isolated and disconnected populations. If we don’t, our comeback banners will lie in tatters.

While the factors that contribute to concentrated poverty and the growing gap between the rich and poor are numerous and complex, one theme spans cities across the vast expanse of Midwest and inland Southern states that have been dubbed the New American Heartland: a growing distance between people and jobs. Of the 25 metropolitan statistical areas (MSAs) that experienced the greatest decline in the number of jobs near the average resident, 19 — or 76 percent — are located in New American Heartland states.This spatial mismatch between jobs and people has real costs. People spend more time and money commuting, businesses struggle to fill open positions, air quality declines as emissions grow, and the fiscal health of municipalities suffers as taxpayers have to simultaneously support the costs of legacy infrastructure and new development.

Development patterns driving this spatial mismatch stem from individual decisions but are not merely the result of a free market. For too long, as Piiparinen writes, our approach to growth has been divided, unequal, and insufficiently strategized. At the Cleveland-based nonprofit Fund for Our Economic Future, where I serve as director of civic innovation and insight, we’ve been working for some time to advance both growth and opportunity across Northeast Ohio. In recent months we’ve seen promising signs of progress on developing a cross-sector understanding of where job growth has occurred and where future growth should be prioritized.

Job hubs can help city leaders decide where to make investments, so that they can offer businesses more of the kinds of properties they’re seeking.

We call these areas job hubs — contiguous places with lots of jobs and multiple employers that sell goods and services outside of the region. (Economic research shows such traded-sector jobs often pay higher wages, are more in demand, and have larger positive spillover when it comes to creating additional jobs.) A key part of the job hub idea is that it’s a clustering of business activity, as opposed to a single large employer. It boasts assets like existing infrastructure and utilities that are attractive to multiple kinds of businesses. For instance, the University Circle job hub within the city of Cleveland is home to large anchor institutions like University Hospitals and the Cleveland Clinic, as well as a number of biomedical companies. 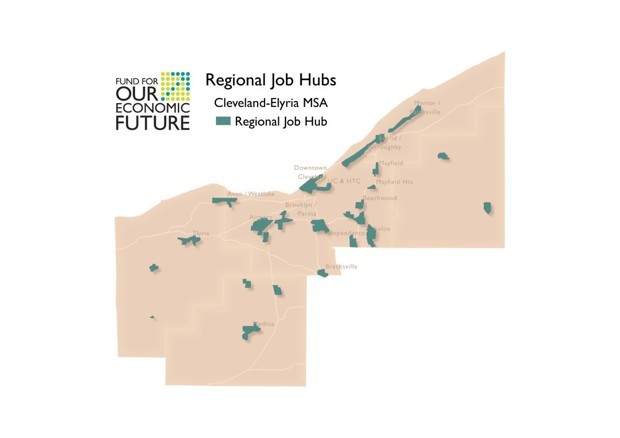 Above: Where the work is: Clusters of jobs around Northeastern Ohio

Meanwhile, Solon, Ohio is a suburban job hub approximately 18 miles southeast of Cleveland in Cuyahoga County, where several of the region’s largest manufacturers, including Swagelok, Kennametal, Nestle, and Schwebel Baking Co., are clustered. Because of their density, job hubs present distinct places that can be planned around.

When organizations across sectors integrate job hubs into their growth strategies, we can improve our economic competitiveness and increase opportunities for disconnected residents. For example, in Northeast Ohio, more than 60 percent of site inquiries from businesses, particularly from large businesses looking to move into the region, are for sites 30 acres and larger. But only 19 percent of our inventory meets this demand, according to analysis by the regional economic development organization Team NEO. Job hubs can help city and regional leaders decide where to make investments, so that a region can offer more of the kinds of properties businesses are seeking. Economic development organizations can work with transportation planners and transit agencies to prioritize highway projects and provide better transit service to job hubs. Land banks — organizations that purchase and aggregate vacant and underutilized properties in a community — can help assemble the land for the sites that businesses find attractive.

But it doesn’t stop there. Workforce agencies, community developers, educators, elected officials, and others can incorporate job hubs into elements of their strategies as well.

Cities, planning agencies, and economic development organizations in our region are already embracing job hubs as a way to strategize together and align their investments for impact. Investing in job hubs has the potential to ensure that our future economy is more connected, more concentrated, and less divided, giving workers and businesses across the Heartland a comeback to truly believe in.