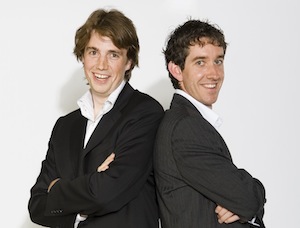 Atlassian, a project-management company headquartered in Sydney, just announced raising a huge, $60 million first round of funding from Accel Partners. This is supposedly the biggest investment Accel has ever made in a software company.

As you’d probably guess given the size of the funding, Atlassian isn’t your typical startup raising a first round. It was founded in 2002 by Mike Cannon-Brookes and Scott Farquhar (pictured), was self-funded until now, and says it has been profitable from the start. It now has more than 225 employees and 20,000 customers. Products include an issue tracker for software developers called JIRA and a business wiki called Confluence.

Atlassian said it’s raising the money now to help fund expansion in Europe and Asia, to expand its ability to acquire other companies, and to give liquidity to its employees — i.e., to help them cash-out some of their company shares, so they don’t have to wait until an acquisition or initial public offering.

Accel’s Rich Wong is joining Atlassian’s board of directors. In the press release, Wong said, “We’ve been fans of Atlassian for years, and the vast majority of our portfolio companies innovate using Atlassian products.”

Update: I just spoke to Wong for more information on the deal. He said the round comes from Accel Growth, the fund that it has used for larger, later-stage deals like the $30 million round it led in Groupon and the $38.5 million round for Squarespace.

Atlassian is pretty much an ideal choice for Accel Growth, Wong said, because it’s profitable, bootstrapped, and already making a large amount of revenue. It has reached $59 million in annual sales without hiring a single sales person, thanks to a trend Wong has been talking about before — “the consumerization of enterprise, the consumerization of business software,” where businesses use tools because they’re embraced by users, not because the they’re imposed by an IT person. So Accel has been after Atlassian for a while, Wong said, and “they finally bought the argument that we could really help them.”

Wong added that he has worked with a number of accomplished CEOs, including AdMob’s Omar Hamoui and GetJar’s Ilya Laurs. But Atlassian’s founders are particularly impressive because, “These guys figured it out by themselves down in Australia.”

“We think that with a few more years of growth, this could be a very attractive public company,” Wong said. “We’re not in any rush.”