There is nothing revolutionary about startup competitions, especially in the tech scene, and even more so in Africa.

Africa has played host to so many startup competitions in its various corners in the last few years. Those of us who are embedded in the startup scene have grown cynical.

Some of the startup competitions that I’ve judged feel random and purposeless. It’s all about short-term gain, with few thinking: What happens to the startups after? How can we help them gain investment? The really high-quality startups don’t bother to enter anymore. For Africa, the world of tech is still new, so we need to take pains to do better.

However, there are new players coming on to this scene that are giving me new hope.

I recently took a trip to Nigeria to judge a startup competition (TechCabal’s Battlefield), among other things. In my time there, I took a hard look into Africa’s starry-eyed startup scene. I’m now questioning my initial assumption about startup competitions. The key is that these competitions need to offer a funding option for viable and deserving ventures.

There is a certain caché that comes with being a startup in Nigeria, which is similar to Silicon Valley. You’re basically a rock star with a ticket to all the cool parties. But that said, funding is really hard to come by and everyone is looking for it. Battlefield was observed like a spectator sport, and according to organizers, the tickets closed as quickly a famous concert would. That is unprecedented in Africa, especially for an inaugural event.

Each startup faced panel of investors, entrepreneurs, and a journalist before their final showdown with the judges. The seven finalists received mentorship and prepared for the “cult of five” who would determine their fate. The competition was very clear in its rules: The startups need to solve a Nigerian problem and be Nigerian.

Every startup that pitched seemed unique, even the bad ones. I wasn’t bored. Maybe Nigerian startups are just better than the rest — more likely, the organizers did a better job of discerning talent. Likely, more experienced entrepreneurs applied for this competition.

“We have hackathons and app competitions here, but not a startup competition like this,” Seyi taylor, the chief executive of BigCabal, the company responsible for Battlefield, told me.

Battlefield had record number of people in attendance, including investors and journalists. The startups that didn’t win were offered meetings with investors by their mentors. Some raised money on the same night, and they all got coverage.

The Battlefield was a rare example of a startup competition that thought ahead, offering both mentorship and investment to the entrepreneurs. This could be key to making startup competitions interesting again. Moreover, competition organizers should learn from Battlefield: We need to look to solve African problems, and challenge the Stygian perceptions of the continent. 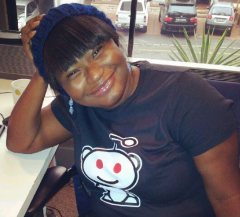 A fiery tweeter and digital native, Michelle Atagana has been hanging around the internet since she was eleven, back in the days of Netscape. Later on, her interest lead to her graduating with a Masters Degree in New Media and Journalism, and her position as Managing Editor at Burn Media.

She was named one of Mail & Guardian’s top young South Africans in 2012, writes a column about technology in Africa for CNN, judges occasional startup competitions and spends her free time working on the final draft of her PhD. But Mich says she’s just a girl, standing in front of a startup, asking them what their business plan is. Mich is also passionate about women’s rights and the African feminist movement.