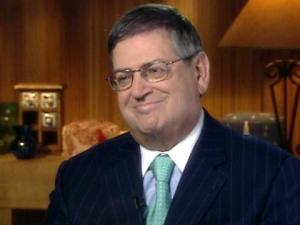 Asian web powerhouse Alibaba has taken yet another step toward snatching up Yahoo.

The Chinese company has hired a Washington, DC-based lobby firm and a law firm specializing in cross-border mergers and acquisitions — likely a necessary step in the foreign, censorship-heavy entity’s plan to take over a major U.S. corporation.

Alibaba has hired the Duberstein Group, an independent strategic political planning and consulting company headed by Kenneth Duberstein (pictured), Reuters reports. Duberstein is a longtime Washington insider who served as Ronald Reagan’s chief of staff in the late 1980s.

The Chinese web company has also hired the acquisition-focused law firm Wachtell, Lipton, Rosen & Katz, to act as an intermediary in the matter. The firm’s practice centers around international takeovers; it claims to have conducted the first cross-border Morris Trust transaction (meaning all the acquired company’s assets other than those being acquired were spun off into a new public company, with the remaining assets being merged with the buying company — all without any tax being incurred).

Alibaba CEO Jack Ma publicly stated back in October that he wanted to buy Yahoo, lock, stock and barrel.

The complicating factor is Yahoo’s ownership of a large stake in Alibaba — 40 percent, to be precise. However, Alibaba began raising the necessary $4 billion to buy back that stake. Yahoo seems to be acquiescing — and it might also be selling back its stock in Japan’s Softbank. If Yahoo released its hold on these Asian entities, it would stand to gain around $17 billion from the combined transactions.

Just last month, Ma and several other Chinese web executives explicitly pledged to support government censorship of their properties and the Chinese Internet. In a three-day meeting with the State Internet Information Office in Beijing, the executives said they would “conscientiously safeguard the broadcasting of positive messages online” and “resolutely curb the spread of rumours online.”