Ampush CEO and cofounder Jesse Pujji saw in 2009 that social media was heading quickly toward mobile devices, and that much of social advertising was going there, too.

The former Goldman Sachs investment banker, along with college friends Chris Amos and Nick Shah, began building a managed software platform to help companies buy and manage mobile ads that are slipped into the news feeds on social apps.

The resulting company, San Francisco-based Ampush, is seeing some impressive growth this year, and has taken a $15 million investment from Red Ventures to continue developing its platform and extending its reach to international markets. (Red Ventures, which operates a sales and marketing platform, itself scored a monstrous $250 million round in January 2015.)

Until now, Pujji and company have bankrolled Ampush themselves, but Pujji said that now is the right time to raise a round.

“The space [mobile advertising] is still finding itself, but now we have a really clear vision and we know where the market is headed.”

The arrival of Red Ventures as a potential strategic partner also played heavily into the decision.

Red Ventures is not a venture capital firm. It’s an enterprise platform that helps companies manage the end-to-end process of delivering new customers through digital marketing. The Charlotte, North Carolina-based company wants to form a strategic partnership with Ampush wherein the two companies can leverage each other’s technology.

“We’ve known the team at Ampush for a long time, tracked their progress, and have developed a strong relationship as they’ve continued to grow,” said Red Ventures CEO Ric Elias. 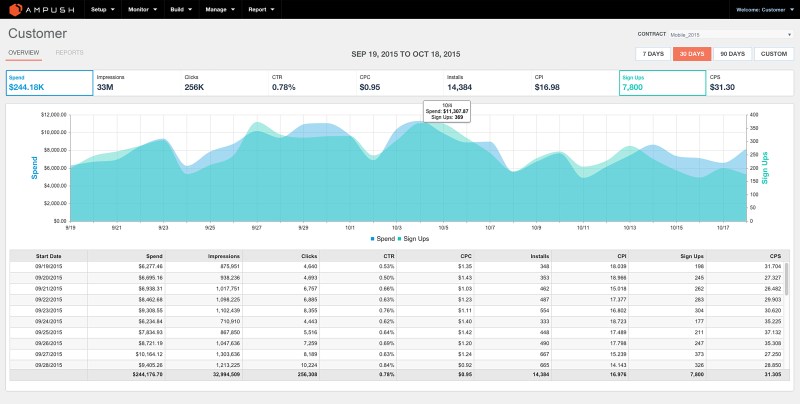 Above: Ampush’s RADAR dashboard for buying and managing mobile ads.

Ampush’s Pujji explains that Internet companies selling premium ad space don’t want to turn their property over to a third-party ad network to be sold to the highest bidder. Platforms like Facebook and Twitter want to work directly with select partners who will form a proprietary integration with their advertising systems.

A few years ago, when users were rapidly moving toward mobile screens, Ampush was among the first companies to form a partnership with Facebook and Twitter to broker mobile in-stream ad space to mobile marketers.

Ampush users’ ad buys are informed by the social targeting data from platforms like Facebook, as well as the CRM data brought from the client company.

Companies can easily manage their various campaigns on Facebook, Twitter, Instagram, and Pinterest from one central dashboard. Using the software platform, Ampush customers can also build ads, and manage and change their bids and ad budgets, among other things.

The managed software platform is billed as an annual contract amount plus a percentage of the customer’s ad spend.

Right now the company is focusing on selling is product to companies in the entertainment, ecommerce, financial services, mobile gaming, and travel industries.

CORRECTION: An earlier version of this article said that Ampush sells software to customers. In fact, the company sells access to a managed software platform.