Nancy Hua used to make millions of dollars a year as an algorithmic trader, she but left to start Apptimize, which she believes is the “larger opportunity.”

Apptimize helps companies perform mobile A/B testing for iOS and Android. Today it announced it has closed $2.1 million in seed funding and has launched its Visual Apptimizer, which lets non-developers A/B test their apps.

“Companies like Facebook use A/B testing as their secret competitive advantage, but most companies can’t afford to build A/B testing frameworks in house,” Hua told VentureBeat. “Apptimize enables this state-of-the-art, data driven technology for everyone. We envision a world where every app is personalized and optimized for each user, and this is the first step toward that future.” 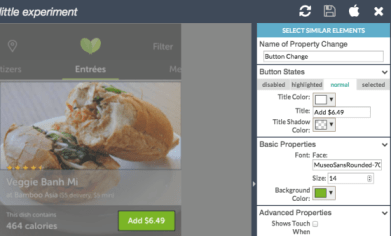 A/B testing is the process of conducting simple, randomized experiments with two variants to see which is the most effective. The goal is to identify what designs and marketing strategies achieve the best results.

For example, does changing the term “search” to “book my hotel” in a travel app yield more bookings?

In the fast-moving mobile ecosystem, it critical not only to conduct these types of experiments but also to conduct them fast. Apptimize allows teams to make visual changes to their app without running it through the development team. They can release multiple versions of the app to the public and get actual data on what works, which Hua said can cut months off the development cycle.

Apptimize also provides a dashboard to manage all the experiments and see real-time results.

Apptimize has been referred to as “Optimizely for mobile.” Optimizely is a fellow Y Combinator startup (and one of the highest valued) that makes A/B testing easier for Web apps. However, mobile businesses are experiencing tremendous momentum at the moment, and investors have said that mobile is the new “battleground” for users.

Hua previously led a fixed income quantitative strategies team at financial firm KCG Holdings. Her cofounder and CTO, Jeremy Orlow, led mobile security at 3LM. Hua said the two of them were debating the “primitive state” of app development and concluded that native app optimization should be as easy and fast as website optimization. They set out to build Apptimize.

Apptimize participated in Y Combinator’s Summer 2013 class. Investors in this round include Google Ventures, a16z, Maverick, and a number of well-known angel investors such as Quora cofounder Charlie Cheever. Apptimize is based in San Francisco.