When city or state leaders talk about increasing their community’s share of “tech jobs,” they’re often referring to developers or engineers. But that doesn’t begin to account for the variety of jobs that require tech skills in today’s digital economy.

A new report out today from the Brookings Institution examines the increasing “digitalization” of jobs in states and metropolitan areas across the U.S. Even in places that aren’t traditionally known as tech hubs, more and more jobs require digital skills. Unsurprisingly, prominent tech hubs like San Jose and Seattle are home to an increasing number of jobs that require the highest level of digital skills.

The report’s authors — Mark Muro, Sifan Liu, Jacob Whiton, and Siddharth Kulkarni — sought to quantify exactly how “digital” the occupations that make up the U.S. economy are. Using data from the government-funded Occupation Information Network (O*NET), the authors categorized 545 occupations as either “high digital,” “medium digital,” or “low digital.”

“It’s been clear that a huge digital change is occurring, but we didn’t really have numbers — that’s what this research is attempting to contribute,” Muro told VentureBeat in a phone interview.

O*NET surveys incumbent workers in a range of occupations about the skills, training, education, and experience needed to perform their job. The organization then scores each occupation based on how much overall knowledge of computers and electronics it requires and how necessary computers are to performing the job. The study’s authors combined these two data points to give each occupation a score reflecting how “digital” it is, on a scale from 1 to 100.

High digital jobs — like software developers, computer systems analysts, and financial managers — had scores of 60 or higher. Medium-level jobs, such as nurses, lawyers, and sales managers, had scores of 33-60. Finally, low digital jobs were those with scores of 33 or below. Construction laborers and personal care aides are examples of occupations that fell into this latter category.

As might be expected, an increasing number of Americans are employed in jobs requiring substantial digital skills. According to the report, nearly 4 million of the nation’s 13 million new jobs created since 2010 fall into the high-level category. And they’re paying well — the mean annual wage for a high digital job in 2016 was $72,896, compared to $30,393 for a low digital job.

The report’s authors also gave all 50 states and the 100 largest U.S. metropolitan areas a mean digital score based upon what share of their population is employed in low, medium, and high digital jobs. Naturally, tech hubs like San Jose, Austin, Seattle, and San Francisco had some of the highest mean digital scores, while Las Vegas had one of the lowest scores. 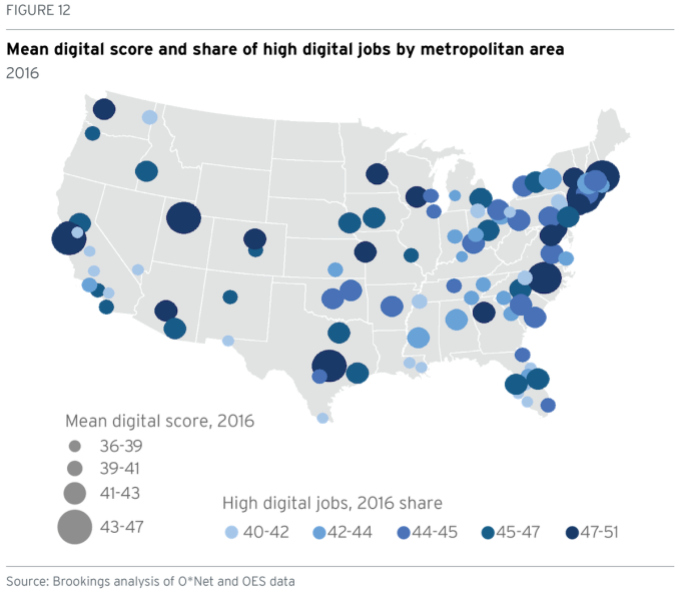 A metropolitan area’s high mean digital score can predominantly be attributed to its large share of high digital jobs — and in many places, that number is only growing. All metropolitan areas saw a significant decrease in the number of low digital jobs in their area from 2002 to 2016. But in San Jose, for example, 15 percent of the city’s jobs in 2002 could be classified as high digital. In 2016, that number grew to 38 percent. Meanwhile, in Las Vegas, only 17 percent of jobs in the 2016 qualified as high digital, up from 2 percent in 2002.

“Digital technologies are clearly empowering and catalyzing tremendous growth in some places, but they are also contributing to a widening spread of especially high-end activity that has contributed to the emergence of the ‘superstar economy’ among cities,” Muro said. And there appears to be some correlation between how healthy an area’s economy is and how many high-tech jobs it has — In Las Vegas, the average wage in 2016 was $49,404, compared to $123,345 in San Jose.

There’s no magical formula that will allow cities with a lower digital score to catch up to places like San Jose and Seattle, but Muro says that there are a number of ways metropolitan areas can prepare their workers for an increasing share of digital jobs. In addition to committing more resources to computer science education, Muro says that workforce training programs should consider educating workers on how to use increasingly popular enterprise tools, like Salesforce and Slack.

“There’s a very substantial question about social inclusion and whether we are making sure that millions of regular working people, who maybe don’t need to know coding or go to a bootcamp, can nevertheless connect in a meaningful way doing what we call routine or everyday digital work,” Muro said.