It’s a complicated machine that could one day deliver blazing-fast calculations, but it’s also reminiscent of the days of mainframe computing, as the system and its accompanying cooling hardware look like a few refrigerators stuck together.

Phoenix will be the first-generation quantum computing system from Berkeley, California-based Atom Computing, Hays said in an interview with VentureBeat. Cofounder Benjamin Bloom will serve as chief technology officer, and Bill Jeffery has joined Atom’s board.

“We think we have a very good approach to quantum computing that is quite unique,” Hays said. “I’m joining the company as we transition from purely R&D to building a business along with the R&D here.”

In an interview, Bloom said the company is the first to build nuclear-spin qubits out of an alkaline earth element. Today the company unveiled its first-generation quantum computing system, Phoenix, as a 100-atom system showcasing astonishing stability.

“This nuclear spin qubit allows you to have coherence times that are orders and orders of magnitude larger than any of the other commercial systems out there,” Bloom said. “We’re writing this quantum information inside the nucleus of the atom, and it just does not talk to the rest of the environment. We work really hard to actually get the information in there. But once it’s in there, it just does not leak out.”

Atom Computing’s quantum computers will use quantum mechanical properties of atoms to process information and solve problems beyond the reach of traditional computers, including drug design, computational chemistry, and more.

Hays was most recently vice president and chief strategy officer for Lenovo’s Infrastructure Solutions Group, where he led the growth and profitability strategy for Lenovo’s datacenter products and services. He also served at Intel for more than 20 years, where he was vice president for Intel’s Xeon processor roadmaps.

The investment comes from venture capital firms Venrock, Innovation Endeavors, and Prelude Ventures. In addition, the National Science Foundation awarded the company three grants. These investments enabled Atom Computing to assemble a team of brilliant quantum physicists and design engineers with experience across various disciplines and applications to help develop the company’s first quantum computing system. There are probably dozens of startups trying to do the same thing, as the stakes are high. 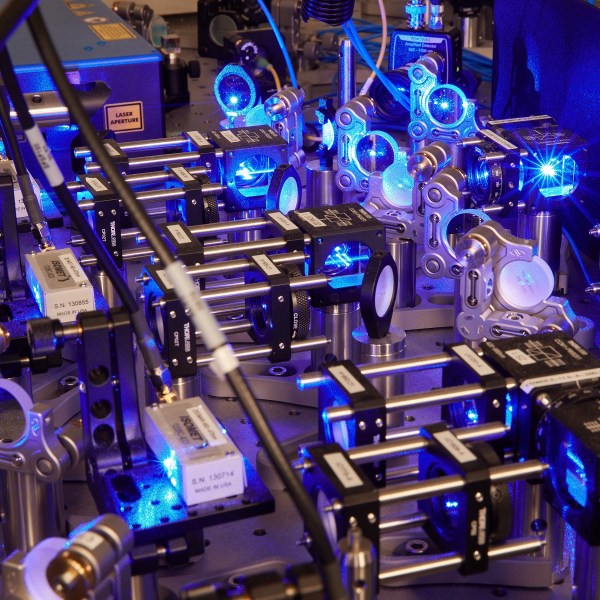 Above: Atom Computing has to cool its quantum system to the lowest temperature.

The three-year-old company’s first-generation quantum computing system, Phoenix, is currently capable of trapping 100 atoms in a vacuum chamber with optical tweezers, which are very tiny traps for the atoms. Those atoms have to be refrigerated at a micro kelvin, or minus 273 degrees Celsius. That’s very cold and is why there is such a huge refrigeration system built around the computer that keeps the atoms a couple of hundred times colder than outer space.

After manipulating the atoms into a grid, the team sends signals to and from the atoms using a complicated projector system, which sends laser pulses to the atoms to program them into states of 1s, 0s, or both at the same time. Atom Computing takes a chunk of strontium, heats it up to a very high temperature, turning it into a vapor beam that can take the isolated atoms and cool them down to the lowest temperatures. The team repeated this trick again to get the temperature down to a micro kelvin.

The laser takes the place of a wire in a traditional computer chip. Quantum computers perform calculations based on the probability of an object’s state before it is measured. The cold keeps the atoms stable for a brief period of time, maybe 100 microseconds, but eventually the heat will interfere with the qubit and produce an error.

These are like the bits of classical computers, where a transistor can be a 1 or a 0. Classical computers carry out logical operations using the position of that 1 or 0. But quantum computing can theoretically be done on a much smaller scale, with individual atoms doing the work for complex calculations.

In quantum computing, operations use the quantum state of an object to produce what’s known as a qubit, or quantum bit. These states are the undefined properties of an object before they’ve been detected, such as the spin of an electron or the polarization of a photon. Rather than having a clear position, unmeasured quantum states occur in a mixed “superposition.” This has been described as being like a coin spinning through the air before it lands in your hand. The system spends a lot of energy keeping those positions in stable states for very short times so they can be manipulated all at once, in parallel. This parallelism makes quantum computers extremely fast, in theory. 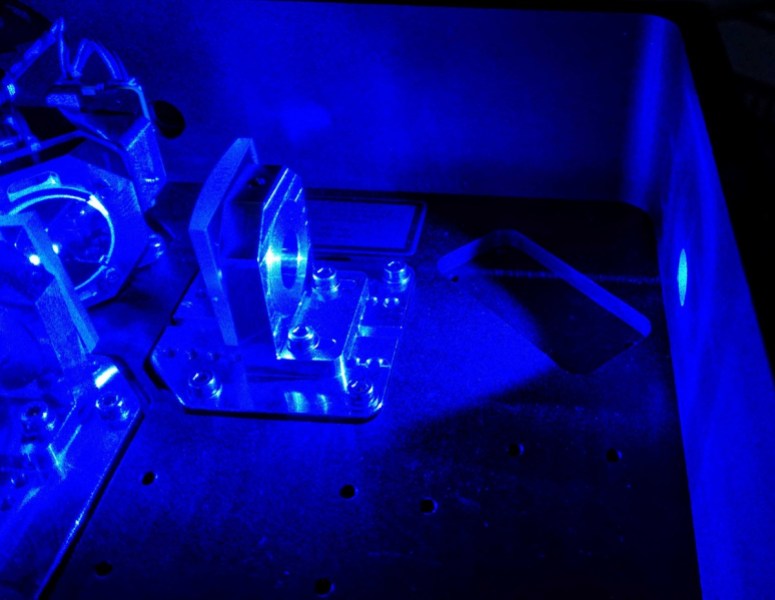 Above: A blue laser on the Phoenix machine.

During the past few years, Atom Computing turned a normal office building into a state-of-the-art optics lab, Bloom said.

Phoenix is able to rearrange and manipulate the quantum states of 100 atoms at once.

“We do some kind of wizardry involving lasers and RF that allows us to essentially just move single atoms at a time, almost like we’re playing some kind of 1980s video game,” Bloom said. “We kind of shuffle atoms around into this tight grid. So we can create this regular nice array that a developer can program.”

The system demonstrates exceptionally stable qubits at scale, with coherence times that are orders of magnitude greater than ever reported, Bloom said. In theory, if quantum computing works, it could be used to plug in special algorithms to solve complex problems quickly that would take forever on a classical computer.

“We built our first system, which allowed us to get these atoms into these really cold clouds and start to see a single atom at a time,” Bloom said. “And that’s when we started going out and talking with people like Rob. In the last few months, we’ve essentially taken that single atom and turned it into this huge array of atoms and started manipulating them and showing off this new qubit that we have called a nuclear spin qubit.”

It could be used to break codes or create hard-to-break security codes or predict multiple particle interactions in chemical reactions. Bloom has been encouraged by the company’s rapid progress, as it moved from 50 atoms to 100 atoms in a day.

“We’re going to start our second-generation system, building it this year and making it available next year,” Hays said.

Atom Computing has just 30 employees at this time.