August Home is out to transform home access, and today the company is announcing that it’s shipping a new line of products that let you lock or unlock your home using your smartphone. This new family of products includes two new smart locks and the new Doorbell Cam.

San Francisco-based August Home was founded in 2012, and it raised $25 million last month from Comcast, Qualcomm, and others. At the time, it said it had more than 500,000 users.

August Home’s new smart locks feature DoorSense, an integrated sensor that tells a user if the door is open or closed. The sensor addresses the problem of people leaving the house and thinking their door is locked when in fact it may be ajar or the deadbolt hasn’t been engaged properly. In the near future, DoorSense will also be able to notify adults when kids arrive home from school.

The company’s products include Smart Lock Pro + Connect, which includes both a smart lock for the front door and an August Connect Wi-Fi Bridge. The $280 bundle allows users to control and monitor their front door from anywhere, using a smartphone. This particular August Home lock can be integrated with Amazon Alexa (for voice commands), Apple HomeKit, the Google Assistant, and Z-Wave Plus (for direct integration with popular alarm and control systems).

The August Smart Lock is a simpler product that sells for $150. It has a new industrial design, and you can also manually lock and unlock the door with your hand. It includes DoorSense, but you can also add August Connect Wi-Fi Bridge (purchased separately) to remotely control the lock or use voice control with Amazon Alexa and the Google Home. Both the bundle and the August Smart Lock are shipping now. 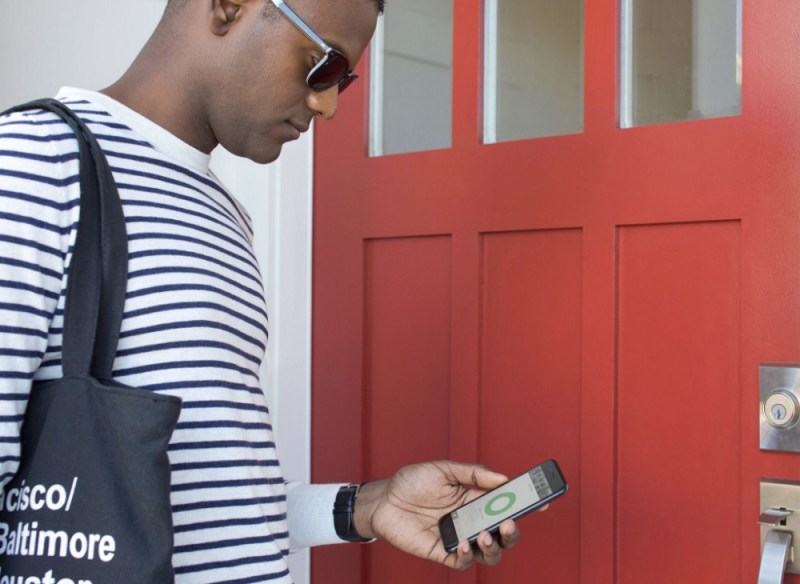 Above: With August Home Smart Lock, you can unlock your front door with a smartphone.

The second-generation August Doorbell Cam Pro lets users see and speak with visitors at their front door. The $200 camera transmits video to a smartphone, so you can see who is at the door before you decide whether to open it, day or night. The new camera comes with a built-in floodlight for night videos. The floodlight can also be motion-activated, scaring away would-be intruders. The camera records activity at the door and lets users replay, download, and share recordings of door activity. The company said the Doorbell Cam Pro has better video quality and can be easily installed, replacing an existing doorbell button. The camera ships on October 10.

The DoorSense technology also has an updated Auto-Lock feature. Previous August Home Smart Locks could automatically lock the door after a set time. With DoorSense, it can be set to lock as soon as the door is securely closed.

“Smart locks are playing an important role in the growth of the smart home,” said Jason Johnson, CEO of August Home, in a statement. “With the Smart Lock Pro, we’ve created a lock that gives people total control over their front door in ways that aren’t possible with a traditional lock. Now people can make sure their door is closed and locked from anywhere. We’re also expanding our offering to include a more affordable lock so everyone can make their door safer and smarter.”

The August Smart Lock Pro and August Smart Lock replace only the interior side of most standard deadbolts. The exterior door hardware (lock) stays the same, which means consumers can use a traditional key at any time.

August has more than 100 employees. It was founded by Johnson and product designer Yves Behar, and it has raised $75 million to date from investors like Bessemer Venture Partners, Comcast Ventures, Maveron, and Qualcomm Ventures. August Home’s partners include Nest, Honeywell, Airbnb, and HomeAway. Recently launched products that compete with August Home’s offering include smart locks from Schlage and Otto. Other rivals include Skybell, Ring, and Kwikset.