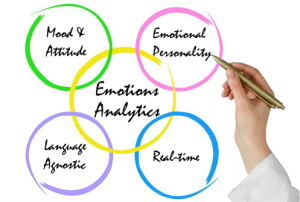 Voice recognition is not a new idea, but enabling machines to determine a person’s mood using their raw voice is.

Beyond Verbal Communications, an Israel-based startup that’s just pulled in a $2.8 million seed round of funding, uses what it calls Emotions Analytics to determine someone’s emotions and character traits in real-time as they speak. Emotions Analytics is a new field based on human vocal intonations and enables machines to understand the person’s personality and moods. According to Beyond Verbal, Emotions Analytics will transform the way people interact with machines and with each other.

“Nearly two decades of research tells us that it’s not what someone says, but how they say it, that tells the full story,” Yuval Mor, CEO of Beyond Verbal, said in a statement. “Beyond Verbal has the potential to impact numerous multibillion dollar verticals and leverage a new market of emotionally-enhanced applications installed in any voice-enabled, voice-activated, or voice-controlled device.”

The technology is based on 18 years of research by physicists and neuropsychologists. Scientists studied more than 60,000 subjects in 26 languages.

Beyond Verbal licenses its technology for use in consumer applications. The first mobile application using its API will launch in the near future, and Beyond Verbal is building a web tool that allows people to use the platform to analyze voices.

The company launched in May 2013. The funding was led by angel investor Kenges Rakishev, and new VC Genesis Angels.