Security, privacy, and identity management are big issues in tech today, and it seems like we spend a lot of time and money dealing with them. If only there were a way to use a single credential that could represent nobody but me — one that would make obsolete all my passwords, pins, and login names.

Toronto-based Bionym has taken a compelling stab at the problem. It’s using the human heartbeat as that unique credential.

Bionym’s product is the Nymi band, a $79 bracelet full of sensors that detect the user’s unique heart rhythm. Each of us has our own electrocardiogram (ECG) wave, so the wristband doesn’t just measure the heartbeats, but also the spaces in between the beats.

After you place the bracelet on one wrist, you touch your other hand to it, allowing the sensors to get a good read on your heartbeat. Then, as long as the sensors know that you haven’t taken off the device since it last checked your heartbeat, it can vouch for your identity to other devices. It might open a car door, authenticate a mobile payment, or unlock your phone.

Actually, Bionym has yet to work out what tricks the wearable might do out of the box. In general, the company says, it’s focused on solving “authentication friction points” such as passwords, PINs, keycards, and other identity prompts. It will rely in large part on the creativity of developers to build compelling applications, it says. 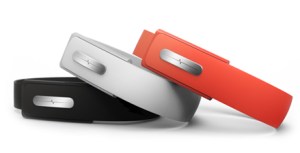 The technology could be useful for all kinds of things. In the enterprise setting it could be used for facilities management — to control which employees have access to which buildings or resources.

“We’re establishing the Nymi as the de facto platform for persistent, trusted identity, and this round of financing is providing us with the resources needed to bring the platform to market,” said Bionym CEO Karl Martin in a statement. “We’re at the forefront of a revolution in identity-based interactions with devices and services, and our momentum continues to grow with the support of our investors and strategic partners.”

The company announced today that it has raised a $14 million funding round led by Ignition Partners and Relay Ventures. Other investors include Export Development Canada (EDC), MasterCard, and Salesforce Ventures, Salesforce.com’s corporate investment group.

It’s notable that Salesforce and Mastercard have invested. Both companies could benefit from simpler authentication technology.

I was told about the Bionym technology during a visit to Salesforce.com’s offices in San Francisco a few weeks ago. It’s one of the products involved in Salesforce.com’s Salesforce Wear initiative. Bionym is partnering with Brivo Labs and Salesforce Wear to create a system that allows bracelet wearers to access buildings, businesses, and public spaces using their unique cardiac rhythm as their passkey for entry.

“With the Salesforce1 Fund, Salesforce Ventures is empowering startups building transformative technologies that revolutionize how companies connect with their customers in today’s mobile world,” said John Somorjai, VP of corporate development and strategy for Salesforce.com. “Bionym’s innovative wearable technology extends the power of the Salesforce1 Platform and we are excited to help them accelerate their growth.”

Mastercard may be interested in using the Bionym technology as a substitute for credit card pin numbers. “We are enthusiastic about working with the Bionym team and exploring ways that we can maximize the persistent authentication the Nymi offers to enable a variety of new commerce experiences for consumers,” said Garry Lyons, chief innovation officer at MasterCard.

Bionym says it’s already received more than 10,000 pre-orders for its Nymi Band, which will be released later this fall.