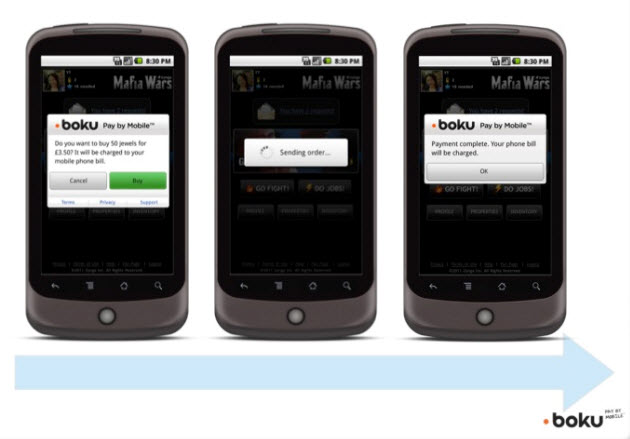 Boku has built a nice business handling direct mobile billing for online virtual goods. If you buy fuel for a tractor in a social game, you can use Boku to pay for it by typing in your mobile phone number; the charge shows up on your monthly cell phone bill.

Now that simple way of paying for goods will be used to handle online purchases of physical goods in Germany. That opens up a much larger potential market to Boku and puts the company in a position to eventually compete with credit card companies and PayPal. That’s a first for Boku.

The move could help the company get on a bigger growth trajectory, and it sets up a way for mobile phone carriers to compete with credit card companies.

“This is like an inflection point in our industry,” said Ron Hirson, senior vice president of product and marketing at Boku in San Francisco, in an interview.

Boku is making the move through an alliance with Telefónica O2 Germany, a provider of broadband and mobile service and a division of Spanish telecommunications giant Telefónica. O2’s customers can pay via MPASS — the online payment system backed by Deutsche Telekom, Vodaphone and O2 — for either virtual goods or physical goods and use Boku’s payment platform to pay for goods that range in price from 0.09 euros to 30 euros.

Upon checkout, the user types in his or her mobile phone number and verifies the transaction via text message. The item is then billed to the shopper’s monthly phone bill. Boku does this now for virtual goods, which are maybe a $2 billion market in the U.S. But physical goods is a much larger market, with hundreds of billions of dollars in transactions.

Using carriers for billing in the past hasn’t worked so well for physical goods because they often took huge 30 percent fees, or higher, from the merchant, compared to just 3 percent fees for credit card companies. The carriers also often required purchases to be in set amounts — such as $1, $2, or $10 but nothing in between.

Boku has negotiated low fees for its transactions with the carriers. And it has full pricing granularity in the 0.09 euro to 30 euro range, said Hirson. The Boku-O2 deal also has support for one-off and subscription payments in Germany, in-app billing, web billing, and full financial transaction and refund support. Boku’s payment is thus “bank-grade,” Hirson said. He said he hopes more carriers will provide physical goods with mobile billing options this year.

The 30 euro limit exists because users still sometimes get sticker shock when they see their phone bills at the end of the month and are more likely to reverse a transaction if the amount is too high, Hirson said. But if users really want to spend more than 30 euros, Boku could switch them over seamlessly to a system that bills their bank account instead.

The system could work pretty well in Germany because there are actually very few credit card transactions. Many Germans use payment systems that bill direct to their bank accounts. Boku is connected to 230 mobile operators in more than 65 countries. More than 2.5 billion customers could potentially use its mobile billing option.

Eventually, Hirson said, he hopes the physical goods billing system will make its way to the U.S. Boku’s investors include Andreessen Horowitz, Benchmark Capital, DAG Ventures, Index Ventures and Khosla Ventures. Rivals include Mopay, Zong, BilltoMobile and others. The company has raised more than $40 million. Boku has 65 employees and was founded in 2009.