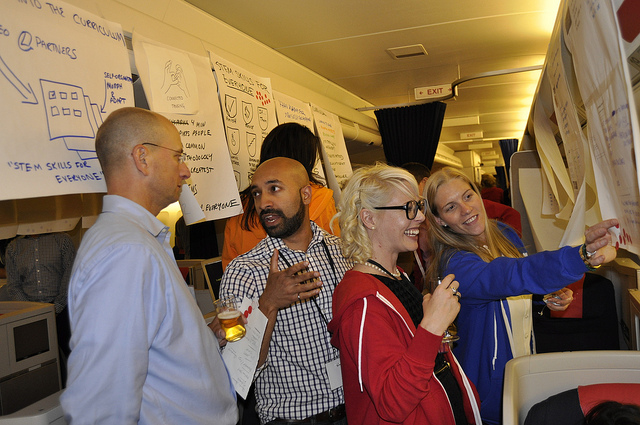 [Full disclosure: British Airways paid for my flight, allowing me to participate in this project.]

30,000 feet above the Atlantic Ocean, entrepreneurs on a chartered flight to London worked furiously to solve one of the world’s most pressing problems.

But with no access to in-flight WiFi, the flight’s 130 passengers turned to Post-its and Sharpies to drum up ideas to address the global technical talent shortage. Hours after takeoff in San Francisco, the airplane windows were covered in multicolored Sticky Notes. 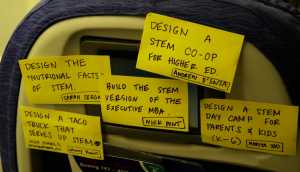 Above: Ideas to alleviate the chronic shortage of engineers

Here’s what I came away with after all was done: We need to get bright people in a room more often with no outside distraction — in this case, it was startup founders and other bright tech company thought leaders — because it helps create laser focus on problems and how to solve them. The group dynamic showed that smaller, implementable solutions were easier to reach consensus around than grand, sweeping ones — something that may well be translated into actually getting things done in the real world. More on that in a bit.

But what had compelled this group of startup founders, investors, and media — myself included — to engage in a brainstorming session in the sky?

The 130 participants on the British Airways 747 were selected by the airlines for the first “UnGrounded” flight, an 11-hour “hackathon” on a privately chartered plane headed from San Francisco to London’s Heathrow Airport. BA paid the way. The airline wants to profile itself as an innovator as a time when competitor Virgin enjoys a reputation as a hip upstart airline.

Technical and logistical challenges aside (I’m still waiting at the hotel for my lost suitcase), the stunt was just crazy enough to entice some top talent to get involved.

More than a publicity stunt?

The UnGrounded trip kicked off during Wednesday afternoon’s press conference at the Clift Hotel to introduce the theme for the flight: STEM — which stands for science, technology, engineering, and mathematics — and the dearth of qualified job candidates.

Passengers learned they would be split into teams based on their experience and interests. The four themes were women in technology, expanding STEM, growing STEM in emerging economies, and meeting U.S. demand for STEM talent globally.

With the media in attendance, British Airways made some announcements of its own, including news that the airline is opening its API to third-party developers. 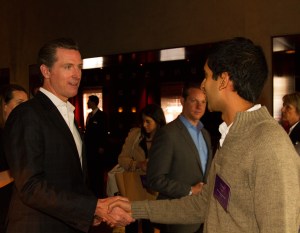 Indeed, BA is one of many global brands that would very much like to be considered entrepreneurial.

“The airline industry is one that has historically not been one of the most innovative, which is why when British Airways decided to do this, I was a little surprised,” said Sheel Tyle, an associate at Silicon Valley-based venture firm NEA.

To find out how BA stands to gain, I chatted with the airline’s vice president of the Americas, Simon Talling Smith, at the press conference and on board the flight. Talling Smith told me the BA would even consider funding an incubator program — representatives from hot travel startups like Peek were selected for the flight.

Airline rivalry aside, the mission for the flight is of mile-high importance. It’s estimated that we’ll be short 500,000 people to fill computer jobs by 2020. For tech companies like Google, this is a problem that could stunt the company’s pace of growth.

One of the major issues that stood out is the lack of women in the STEM field. Google vice president Megan Smith said she opted to attend the flight as “young women aren’t realizing how impactful these careers are.”

While more software engineering jobs are available than ever before — women’s share of bachelor’s degrees in computer science at colleges and universities is decreasing, according to the National Science Foundation. British Airways’ team frequently cited the statistic that women only make up about 35 percent of the tech workforce.

It’s not just women who would benefit from more access to STEM education but also men — particularly those in more traditional industries who are concerned about their long-term career prospects. In addition, the teams focused on how to make STEM subjects cool for schoolchildren; a debate erupted on the flight about the right age for kids to learn to code.

Some worthy ideas were advanced on the flight, including ways to build upon AdvisHer, an online mentorship community for girls, and Beacon in a Backpack, a science and tech toolkit that backpackers can deliver to remote communities when traveling.

Talling Smith told me the ultimate goal would be for some of the attendants to put these ideas into practice, perhaps even forming new businesses.

Curious about what it’s like to brainstorm at 30,000 feet? Don’t miss the gallery at the bottom.

In a matter of hours, the entrepreneurs will present their ideas to the United Nations’ International Telecommunication Union (ITU) Secretary General at the DNA Summit, a London-based conference for world leaders to discuss global issues.

It’s a tall order given that we’re all still battling jet lag and recovering from a cocktail reception at the House of Lords.

To form these ideas, the passengers were split into four groups. We sat in tight clusters in seats and perched on aisles — the flight attendants were informed that we should be permitted to freely roam. IDEO presented the teams with notepads, pens, Post-its, and a clipboard. 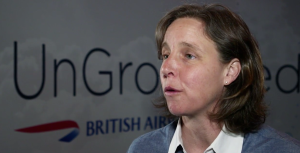 One of the benefits was the close mentorship and guidance from some of the more experienced attendees. I joined one of the groups working on an idea to retool and retrain young adults and better prepare them for the job market. Google’s Megan Smith offered plenty of valuable advice inspired by programs like the Engineering Practicum, where interns work on a 12-week software engineering project.

If you’ve ever been led through a “design-thinking” brainstorm, just imagine something like that but in a high-pressure, noise-filled environment. Oh … and let’s not forget turbulence.

We often had to shout over each other at times, which was frustrating. I couldn’t tell whether the flow of free booze was hurting or helping the situation. It was a stress-reliever but encouraged one of the groups to break off for an impromptu dance party.

British Airways tells me that this is the product of a year and a half of planning. This was the first time that an airline has chartered a private flight for a group of entrepreneurs to brainstorm ideas around education. It wasn’t without a hitch, but it was an impressive, well-organized effort overall.