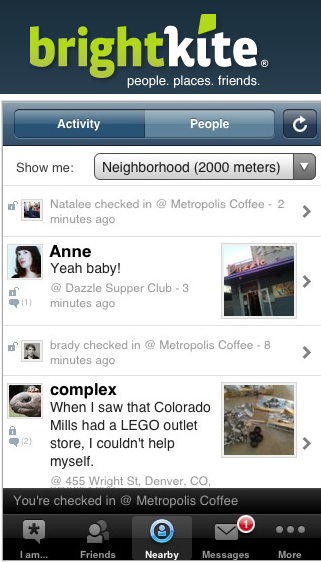 Brightkite, a social network that lets users share their location on mobile phones, has merged with Limbo, a Silicon Valley company with a rather unique auctions service for mobile phones users.

It may mark the end of an era. After investors poured money into a host of mobile social networking companies last year, the companies are now trying to figure out how to boost their profile enough to be heard above the noise. And investors may be getting inpatient. In this case, Brightkite picks up about $9 million in capital that had been pumped into Limbo by its investors three months ago.

[Update: The two companies are especially well suited for each other, according to Limbo chief executive Jonathon Linner, now capable of producing apps for a range of platforms without prioritizing or postponing ideas. “In the past we’d have to choose between developing feature A or feature B. Now with the bigger team, we have the ability to do both,” he says.

Limbo was impressed by BrightKite during its interaction with the company. It had been approached by several similar startups because it had “money in the bank,” but discussion never progressed beyond introductions. “We weren’t actively searching for a merger or acquisition opportunity. Brightkite just seemed to be going down the same path,” Linner says.

Despite some rumors that BrightKite’s future hinged on a capital infusion, Linner says this is not the case and that the company would have easily sustained itself independently even without the deal.]

Last year, location-based social networks were all the rage — or were supposed to be. The iPhone launched its new 3G phone, combining new fast-browsing and location-based awareness, and everyone thought users would soon be chatting and networking with friends over a host of new services, from Loopt to Brightkite, that focused on such local social networking.

However, such mobile social networking hasn’t taken off as quickly as people thought. The market has remained fragmented. Location-based apps have also been hampered by the iPhone’s inability to run third-party apps in the background. These companies have worked hard to make their applications even more social, putting peoples’ profiles front and center in efforts to get around such limitations. However, they still haven’t picked up enough traction to prevent themselves from getting steamrolled when the big guys — Facebook, MySpace and Google — get their act together and jump into the location game in a big way. In fact, Facebook and MySpace mobile applications are seeing huge growth already, and Google has already entered the location-based social networking game.

On the one hand, the smaller companies say their user numbers are growing (Brightkite, for example, now says it has 2 million monthly unique users after the merger). However, its not clear how loyal these users are. It looks like many users try out the services for a while, then give up after the novelty wears off.

That investment, combined with the fact that Limbo’s chief executive Jonathon Linner is taking over the merged company, makes it almost certain that Limbo was the acquirer. Martin May, co-founder of Brightkite, will now serve as EVP Products of Brightkite.

The companies said in a statement that integration is expected to happen within weeks and, until then, users will continue to use Limbo and Brightkite as they have in the past.

The new Brightkite is headquartered in Burlingame, Calif. and has offices in Denver, Colo. and Helsinki, Finland.