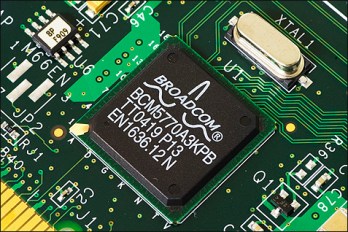 Broadband chip maker Broadcom announced today that it has acquired Beceem Communications, a company that has developed technology to support multiple 4G networks, for approximately $316 million.

Beceem is the first company to develop a 4G “multimode platform” that can work on both LTE and WiMax 4G networks. Its technology can support peak speeds of up to 200Mbps and will give device manufacturers the freedom to build 4G devices without worrying what type of network they will be used on.

The purchase will supplement Broadcom’s move into 4G cellular networks. The company is already well-known for its 3G and 2G cellular solutions as well as other communication technology such as WiFi, Bluetooth, and GPS. It’s also the perfect time for Broadcom to gear up for 4G — Sprint’s WiMax coverage is increasing steadily thanks to its partnership with Clearwire, Verizon is readying the launch of its LTE network for this year, and AT&T plans to roll out its LTE network in 2012.

The LTE and WiMax technology divide is similar to the CDMA and GSM split that has kept cellular networks apart for some time. Similar to how you can’t use a Sprint CDMA phone on AT&T’s GSM network, you won’t be able to use a WiMax Sprint phone on AT&T’s LTE network. Beceem’s unifying technology solves that problem, which should put Broadcom in a good position once more cellular carriers and device manufacturers are ready to go 4G.

Beceem showed similar foresight years ago when it was one of the first companies to develop a mobile WiMax chipset. At the time, Intel was reselling the company’s chips for its own WiMax efforts. Now LTE looks like it will be the leading 4G standard, but Beceem wisely pivoted its technology to support both networks.

Based in Santa Clara, Calif., Beceem has raised at least $80 million since it was founded in 2003. We’re awaiting more complete funding details from the company.