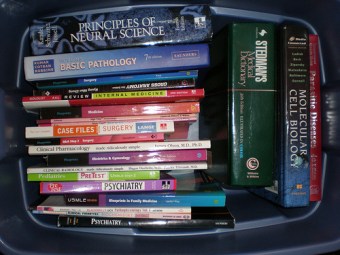 CampusBookRentals.com announced on Tuesday they raised a $20 million second round of financing, just in time for the back to school craze.

Ask any college student and they will tell you one thing: textbooks are expensive. Students across the country can spend upwards of $1000 for just one semester’s course materials. CampusbookRentals.com offers a cheaper study solution by allowing students to rent new and used books by quarter, semester and year.

The Utah-based company’s textbook rentals serves college students on more than 5,600 campus in the United States. Students can search for books by title, author or ISBN number. CampusBookRentals.com also buys back books, another headache for students who opted to purchase textbooks.

“We have to fill a lot of orders in a small window of time,” said chief executive Alan Martin in an interview with VentureBeat.

CampusBookRentals.com services are stretched certain months given the cyclical nature of the semester system. The company will use part of their funding to support the extra hires it makes during this time. Martin explained CampusBookRentals.com is actually able to retain employees by offering part-time off-season positions.

The funding will also be used to flesh out operations. “We didn’t outsource our warehouse operations or customer service,” said Martin, who noted that the company has finally found a facility that can sustain it for more than six months.

According to Martin, the company is on an accelerated path.  “This market has just been so crazy over the past years, we are literally just trying to keep up,” he said. In order to keep up, Martin introduced Scott Klossner, former chief financial officer of outdoor apparel retailer Backcountry.com to its board.

“He has seen an operation much like our scale into a very big business,” said Martin. Klossner’s Backcountry.com is also depends on a working fulfillment center and is based in Utah. “He has just been exactly where we are.”

The space is a crowded one, however. Competitor Chegg operates on a larger scale  and recently acquired CourseRank and Notehall to build out its offerings.

While Chegg has not quite made that much, it is sitting on more rounds of funding than CampusBookRentals.com. Both companies were founded in 2007.

“We’ve kind of had a little bit of a different path,” explained Martin. “We’ve grown up kind of quietly here in northern Utah. We built a business on debt and eventually equity.” And just like a college student would say, “Now, we’re just stoked for the financing.”