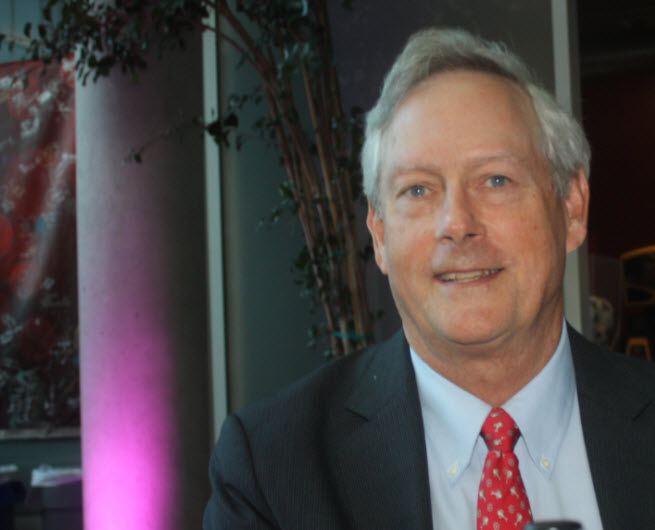 It’s no secret that the U.S. economy is in a tough state, with mile-high deficits and slow growth in jobs. Other countries are pulling ahead, but some cling to the hope that startups and the spirit of entrepreneurship embodied in Silicon Valley could save the country. That’s one of the conclusions reached by a team of Harvard Business School professors who toured the valley this fall.

Their report included a survey of 10,000 HBS alumni across the economy. About 71 percent of respondents expect U.S. competitiveness to decline over the next three years, with workers’ living standards under greater pressure. About 1,700 of the respondents had to personally make decisions about whether to leave the U.S. for jobs overseas.

One of the participants was William Sahlman (pictured above), a professor of entrepreneurship at the Harvard Business School. Here’s our transcript of our interview with him. (And see our interview with Harvard’s Willy Shih on manufacturing in the U.S.).

VentureBeat: What message do you really want to get across?

Sahlman: The question is, “Can Entrepreneurship Save Us?” And the answer is always “Yes.” Provisionally. [laughs] One of the great strengths of the U.S. has been its ability to have smart people go out and try to find opportunities to feel like they can succeed, to be able to get early customers to buy products and services from startups, to be able to attract financial capital and human capital, and ultimately to be able to convert that human and financial capital into wealth. That’s been an important part of the process.

And also, along the way, to be able to fail. In many countries failure is unacceptable — socially, morally, legally. In the U.S., as long as it’s not a moral failure, it’s a sign of experience. That is so fundamentally different from most of the world.

The system is always at risk, because if the perception of opportunity declines, if people don’t see opportunities or companies grow more conservative and won’t buy from early-stage companies or you can’t get smart people to join your team or you can’t get access to financial capital or you can’t go public and remain independent or the prices you get when you do sell the company are modest, then the whole system actually freezes.

VB: What worries you?

In fact, if any part of the system is problematic, the whole system suffers. If Electronic Arts can’t hire competent programmers, because our educational system for whatever reason is not producing the human capital that they need, then they’ll go find places that do produce that. They’ll go to Estonia, which by the way has a massive shortage of programmers as well. They’ll go to China. They’ll go to other places.

We have a great, great concern in the U.S. now about the level of risk. People looked at the financial crisis and said we had too much risk, that we need to protect people from losing money. We need to make sure that no person gets into a situation in which they might lose their hard-earned savings. And in the attempt to mitigate the financial risks to which we were all exposed, they actually began to drive out risk-taking in the real economy. Risk-taking in the real economy, with financial support, is what we desperately need.

Suppose I treat Kleiner Perkins exactly the same way, in a regulatory sense, as I treat AIG. So I have the same restrictions, requirements, and registrations there. I take a business that was a simple business to operate with sophisticated investors that ran successfully for decades, and I make it a highly regulated business in which I worry about whether or not people are going to lose money. I will have done the opposite of what I need to do. Take the first Kleiner Perkins fund, which invested in Genentech and Tandem, to give two random examples. Their failure rate was 60 percent. You don’t get Tandem and Genentech unless you invest in 60 percent that fail.

Sahlman: But it doesn’t go to zero, and it never remotely approaches zero. So again, if we don’t have Amgen prepared and able to recruit the people it needs to recruit, having a regulatory path that it understands and doesn’t have unnecessary complexity and uncertainty built into it.

Philosophically, we need to think about ways in which we encourage people to pursue opportunities, knowing that they might fail. We need to encourage people to invest, knowing that they might lose their money. Parenthetically, the alternative right now for investors is to earn 0.0 percent per year, which compounds at the same rate. It’s the only number that actually meets that characteristic.[laughter]

VB: Is there anything wrong with entrepreneurship in the country right now?

Sahlman: No, but if you look at the amount of venture capital in the U.S., it’s gone down pretty significantly. If I looked in life sciences and medical devices to give a specific example, it’s essentially disappearing. That’s cascading back through the system, so the likelihood that you’re going to end up with the kinds of products that Amgen created when it started, or Genentech, or the early pioneers like Genetics Institute, it’s actually smaller and smaller every day.

Why? Well, if you’re a biotech company going public, you have exactly 0.0 analysts following you. You have a liquidity where 100 shares move your stock price, and where even the ability to reward people with stock options has the opposite effect. We put in place Sarbanes-Oxley [corporate governance law in the wake of Enron’s fiasco]. We put in place the separation of research and investment banking. We put in place decimalization. We put in place, in essence, everything that you could do to drive profits out of financing early-stage companies earlier in their lives. Well, what do we get? We get Facebook at a $100-billion-dollar market cap, which turns out to be not so good.

VB: Some kinds of startups are more desirable, in your view, than others. Or if you set up certain policies, you get a certain kind of startup, and it’s not necessarily the kind you should have.

Sahlman: Let me give an example. Our students, historically, go into whatever is popular at the moment in time. They’re like everyone. So if hedge funds are popular and pay people lots of money, unshockingly, smart people go into hedge funds. It’s not where they necessarily end up. In the final analysis, people end up going where society rewards them and where their services, ultimately, are needed. The same is true of entrepreneurship.

Do we need another social networking site? Do we need the 600th Groupon? No. That’s lemmings chasing each other off the cliff. But, by the way, they did that in disk drives. They did that in workstations. They did that in computer retail. They did that in automobiles. There were 200 companies in the automobile industry. There were 200 manufacturers of TV sets. So in effect, one should never have an opinion about the kinds of activities. One should say that we should create an environment in which basic entrepreneurial action takes place, and the markets will sort themselves out over time, and the right people will end up in the right jobs. All the people who crashed and burned in 1999 and 2000 ended up re-potting productively. That’s the magic of the American system.

VB: Is it a matter of tweaking things? The JOBS Act seems like it does something positive, allowing something like Kickstarter to have real investment ability for some of the crowdfunded companies. That seems like a tweak that’s a positive job-creating thing.

Sahlman: Let’s take Kickstarter and Pebble as a good example. If you went to any venture capital firm in America… If you went to Mike Moritz, or pick your favorite guy, and you said, “I want to start an e-ink-based watch company to sell to consumers.” The likelihood you would get funded is the same as the interest rate on Treasury bills. So what did Kickstarter do? It allowed people to vote, by agreeing to effectively pre-pay for a product, $10 million dollars to support a product and a company that hired a bunch of people in the U.S. Even I signed up to get the damn product. [laughs] And I’ve supported other Kickstarter projects — where I know beforehand, by the way, in contrast to many investments I’ve made, that I’ve lost my money. I don’t need to wait. [laughs] I’ve pre-lost all my money.

VB: It’s a good thing the laws allow that to happen.

Sahlman: Well, crowd-funding is a great. I worked on the JOBS Act pretty intensively with Kate Mitchell and other people. Crowd-funding is something where you have the potential to have large numbers of people invest relatively modest amounts of money to support entrepreneurial actors who may fail. You need a structure to make sure that scam artists don’t end up getting grandmothers to invest in corrupt projects. But if you say, in contrast, that nobody can invest in these kinds of projects unless you’re very rich or whatever, then you will put a clamp on the amount of equity that can go into the small business and entrepreneurial side of the economy, which is the part that has failed us in recent years.

The reason why, in any given year, you create lots of jobs and you destroy lots of jobs. New business formation turns out to be essential to the creation of new jobs, almost by definition. That part of the job creation equation has been hit badly during this financial downturn. We don’t know whether it’s a secular shift or a cyclical shift. Relaxing rules around crowdfunding is an example of ways in which one might get some kind of capital flowing to something that’s vital to job growth in the U.S.

The benefits of crowdfunding outweigh the costs. People have articles in which they only talk about the down side and the cost. That’s like reporting half of a baseball score. Trying to have some balance in which we say, almost philosophically, “These kinds of activities are important in the economy and we’re not going to deny people access to them, but we’re going to disclose what the risks are,” that makes sense.