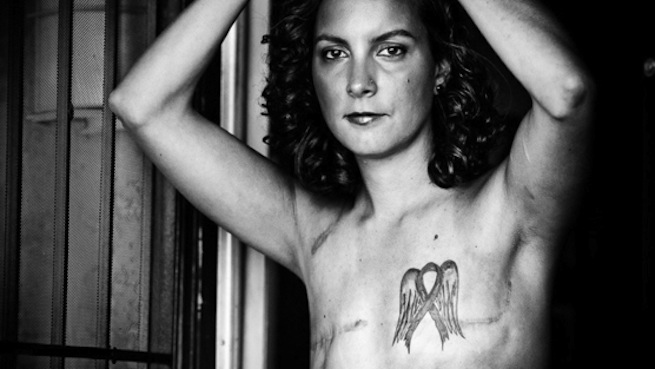 When Scorchy Barrington was diagnosed with stage IV breast cancer, she turned to a community of survivors on Facebook.

The New Yorker was most inspired by the SCAR Project, a series of large-scale portraits of young breast cancer survivors shot by photographer David Jay. The website and Facebook community page features images of men and women proudly displaying their post-mastectomy scars. The mission statement? “Breast cancer is not a pink ribbon.”

But Facebook has been systematically removing the images, even banning Jay from posting for 30 days, a Change.org petition alleges. Barrington, an author, started the online petition to urge the social network to stop censoring photos of men and women who have undergone mastectomies, putting them in the same bracket as pornography.

“Photos like those included in The SCAR Project help me feel a little less alone in what I’m going through. With so many young women facing breast cancer diagnoses, I know these photos give them hope, too,” Barrington writes in a petition addressed to Facebook CEO Mark Zuckerberg.

“By removing the photos, Facebook is sending us a message that our struggle with this disease should be kept in the dark,” Barrington said.

Facebook’s community standards and help center FAQ stipulate that it does allow post-mastectomy photographs as well as images of breast feeding. But it has a strict ban on nudity and will remove photographs of exposed breasts. 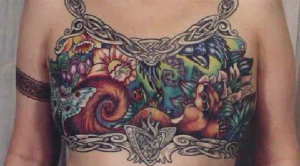 Above: When Facebook took down this photo, it caused a public outcry.

Still, Facebook will occasionally violate its own policies and erroneously take down content. When a tattoo parlor published an image of a female customer, who is also a breast cancer survivor, Facebook repeatedly took it down.

“We may remove a photo showing mastectomy scarring either by mistake, as our teams review millions of pieces of content daily,” said Alison Schumer, who works in Facebook’s public policy and communications team.

In this particular case, the powers-that-be at Facebook are taking notice. “We have been in touch with leaders of organizations that seek to promote greater understanding of, and support for, those who have had mastectomies,” said Schumer.

The petition has received almost 8,000 signatures so far, and according to Barrington, Facebook’s global vice president of public policy reached out to her this weekend to set up a conference call.

“Facebook’s representatives said they’re fully supportive of the SCAR Project and that they do allow mastectomy photos – but there’s clearly both internal and external confusion that’s leading Facebook employees to remove these photos when they should not,” said Barrington.

Facebook has been receptive to Change.org campaigns in the past.

In Feburary, the social networking giant removed some Brazilian pages that joked about rape and pedophilia after a local launched a petition. Facebook also took down homophobic pages in July. Over 750 petitions have been launched against Facebook on Change.org, primarily take-down requests.

“Given the sheer number of requests they field from users every day, it takes extra external pressure to get them to prioritize one policy change over another,” said Charlotte Hill, a Change.org spokesperson.

Breast cancer is the leading cause of cancer deaths in young women ages 15 to 40. SCAR Project participants are typically under 30. About 100 have been photographed to date.

Alongside those who signed the petition, Barrington said she will keep fighting for the photos that have “given her strength.”

We have long allowed mastectomy photos to be shared on Facebook, as well as educational and scientific photos of the human body and photos of women breastfeeding. We only review or remove photos after they have been reported to us by people who see the images in their News Feeds or otherwise discover them.  On occasion, we may remove a photo showing mastectomy scarring either by mistake, as our teams review millions of pieces of content daily, or because a photo has violated our terms for other reasons. As a reminder, our terms stipulate that we generally do not allow nudity, with some exceptions as laid out above and here, consistent with other platforms that have many young users.