A New York City startup called Cartonomy announced today it has raised $1 million to launch next year its online version of a group of people tossing their product choices into a shopping cart as it rolls down the aisle.

The group shopping cart is currently in open beta, with a release version targeted for early February.

“I remember one time when I was lost [and trying to find things] in a supply closet” at an unnamed university, CEO and founder Jack Lowinger told VentureBeat. An economic sociology professor who has taught at Johns Hopkins and Yeshiva Universities, he described that closet as “a museum of discarded technologies like floppy discs.”

That experience led him to attempt fixing “the broken enterprise shopping system in universities” through Cartonomy, he said. The site is also targeted at families and groups of friends.

The platform has a catalog of over 11 million products, thanks to partnerships with Target, Walmart, Best Buy, Sears, Office Depot, Staples, and Drugstore.com.

To shop, a user creates a group on the Cartonomy site or in the upcoming iOS/Android apps, and then invites an unlimited number of others to join. The group creator has admin and payment control, although she can delegate or share those controls with others. Any group member can add items to the cart.

Members can search retailers’ inventory by brand, model, product type, or other parameters; can compare prices between the retailers; and can exchange comments with others in the group. In the beta phase, the group is sent to each retailer’s site for the final payment screen, but Lowinger said the release version will have a single payment screen covering all retailers on Cartonomy’s site. 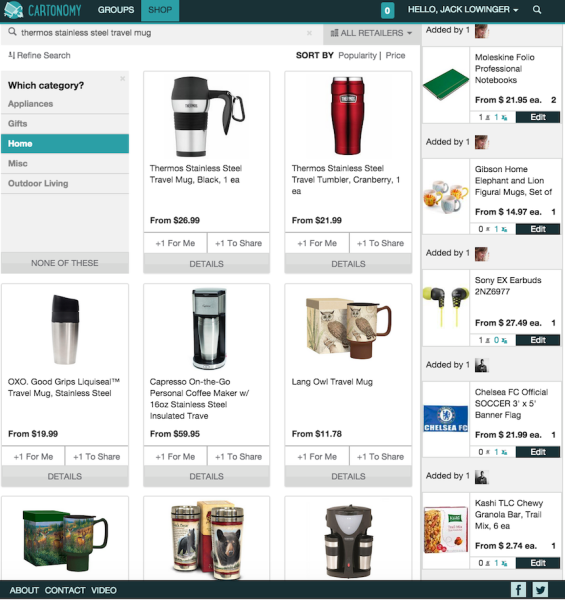 Above: A screen in Cartonomy, with the group’s shopping cart in the right column

So, a school might use Cartonomy to collect and purchase all the teachers’ supply needs, with everyone finding and adding their own list. Or an extended family can buy things for a planned trip without negotiating a high volume of emails and phone calls.

Lowinger acknowledges that “a lot of companies are doing similar things.” IBM, for instance, has Coshopping software that allows two shoppers to create a single browser session controlled by one of them. There are also various versions of shopping with social feedback, like Motilo.com. But, he said, “no one else is in collaborative group shopping.”

Cartonomy intends to make its living by taking a commission on products sold. For large customers, the company will allow the organizations to keep all or part of the commissions in exchange for a negotiated annual fee. Enterprises will also be able to brand a white label version.

The funding, which has been raised since Cartonomy’s inception in 2012, will be used “primarily on further development” of the platform, Lowinger told us.