If finding out what’s hot in tech requires little more than following the money, then podcasting startups have been positively roasting in recent months.

A few weeks back, New York-based Anchor raised $10 million in a series A round of funding led by Google’s venture capital arm, GV, which followed a week after Swedish audio startup Acast announced $19.5 million to grow its platform globally. This, in turn, came swiftly after New York-based podcasting company Gimlet Media nabbed $20 million over the course of a month, while HowStuffWorks raised $15 million to expand as an independent podcast network and podcast hosting technology platform Art19 received $7.5 million.

Now, it’s CastBox‘s turn to announce some funding. Founded in 2016 by former Googler Xiaoyu Wang, CastBox is similar to other podcasting services out there insofar as it offers a slick, user-friendly interface to help users search for and store myriad spoken-word content. Additionally, CastBox said that it integrates and syncs across automotive and smart home devices, including Android Auto, Google Home, and Amazon Echo.

With headquarters in Beijing and offices in San Francisco and Hong Kong, the company said that it has seven million users around the world. A little probing reveals that number actually refers to downloads, though — it claims to have four million active users.

CastBox has today announced that it has raised $16 million in funding, but digging down into the details of the announcement reveals something of an opportunistic facet to the big reveal. The tranche consists of a $12.8 million series A round from China’s Qiming Venture Partners, IDG Capital, SIG China, GSR Ventures, and ZhenFund — but this round closed way back in June. The remaining $3.2 million was garnered via a $1 million angel round back in March 2016 and a pre-series A from IDG last November.

That CastBox has taken so long to announce these raises suggests it may be jumping on the “me too” bandwagon given all the other recent funding announcements, but it insisted that it has simply been too busy working on its product to focus on PR.

Whatever the reason, the company is actually announcing a cool new feature today too: in-audio search.

Using natural language processing (NLP), CastBox is rolling out a search facility within its Android and iOS app that lets users search for specific topics or keywords spoken within podcasts and other audio content.

To achieve this, CastBox “algorithmically” transcribes its hosted content. There are a number of use cases for this feature. For example, let’s say you listened to a podcast last month, you’re desperate to revisit it, but you can’t remember whose podcast it was — all you remember is the topic of conversation and some choice soundbites. By tapping some relevant words into CastBox, you stand a reasonable chance of finding it.

However, forgetful people isn’t necessarily the target audience with in-audio search. It’s pitched at helping users find things to listen to, as it uses machine learning to recommend relevant shows and podcasts based on a user’s keyword search.

“We’ve recognized that there’s a need for traditional radio listeners, who may not be familiar with brand name podcasts, to be able to discover new and relevant content, so we’ve made it easy for new listeners to quickly discover the most relevant content,” a CastBox spokesperson told VentureBeat. 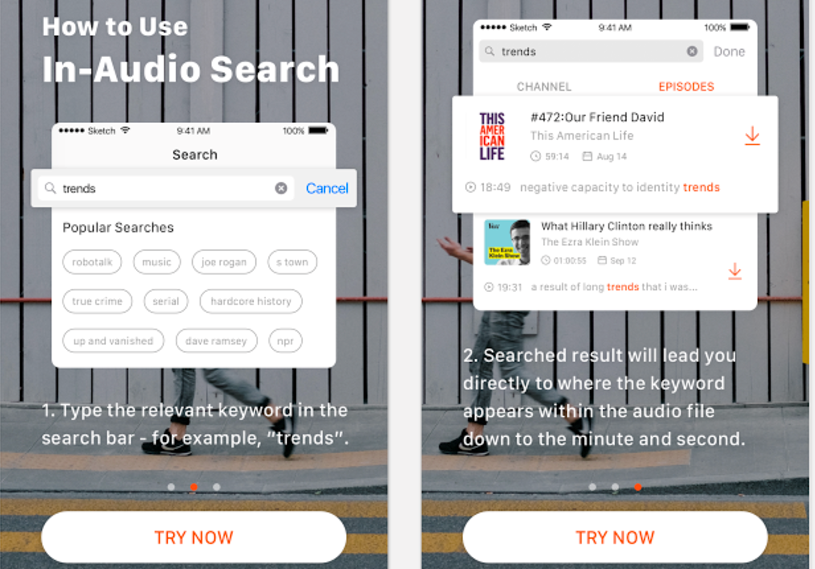 One apparent reason for the surge in podcasting investment seems to be a recent report by Edison Research and Triton Digital that delved into digital media consumption trends, focusing specifically on audio and podcasting. As reported by Nieman Lab back in March, the report found that 67 million Americans, or 24 percent of the population, listen to podcasts each month, representing a rise of 3 percentage points on the previous year’s 57 million figure.

Though many tech firms are investing heavily in video, audio holds a number of key advantages — you can do other things while listening, such as drive or paint the house. Throw into the mix ubiquitous connectivity, devices for every occasion, and burgeoning voice-control functionalities, and it seems this is the perfect cocktail for podcasts to flourish.

“There’s an evident growth in the number of smart devices — wrist, car, home — that are fueling this demand for audio platforms and thereby funding,” noted CastBox founder and CEO Wang. “If you consider the next generation user interfaces, with products like Google Home or Amazon Echo and even Android Auto paving the way, it will no longer be powered by your fingers; rather, it’ll be spoken audio powered by audio commands. But behind the scenes, what’s empowered companies to move into the audio space has been the tremendous progress in natural language processing to understand spoken commands, and machine learning to enable the most personalized recommendations to each user.”

CastBox said that it will use the funding it has raised over the past 18 months to expand and advance its efforts to develop strategic partnerships with podcast networks and independent studios.

“With this latest round of investment and the release of in-audio search, CastBox is well-positioned to become the YouTube of audio,” added Wang. “We’re taking a new approach in the space, harnessing cutting-edge technology to deliver the best user experience and content discovery for listeners across multiple platforms on-demand.”

CastBox currently makes money from a paid version of its app that serves up additional features and services, while it’s also dabbling with display advertising. Moving forward, the company said that it will explore monetization through original and premium content, while it may experiment with a new subscription-based model.