Three months after raising more than $500 million, Chicago tech darling Outcome Health announced today it has made a prominent hire — Twitter’s former vice president of engineering, Nandini Ramani, who will join the company as its chief engineering officer.

Outcome Health, founded in 2006 as Context Media, digitizes educational information that used to be displayed on pamphlets and posters in waiting rooms. Some of the company’s products include a digital anatomy board, which physicians can use as they explain a diagnosis and treatment options to a patient, as well as a tablet that delivers personalized information to patients before meeting with a doctor. Ramani tells VentureBeat in a statement that she’ll be working to help grow the company’s engineering team in both its Chicago and New York offices.

“There are several fantastic companies in the [health care] space, but I love Outcome Health’s mission of delivering the best health outcomes possible and its commitment to improving the quality of life for patients and the entire health care value chain,” Ramani tells VentureBeat. 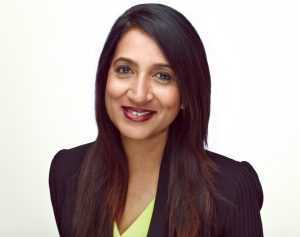 The company claims to partner with 231,000 health care providers, and has more than 600 employees. Outcome Health has a few different revenue streams — the company charges medical device and life science companies, for example, to display marketing on Outcome’s tablets. The cofounders are Rishi Shah and Shradha Agarwal, who met while studying together at Northwestern University. In addition to running Outcome Health, Shah and Agarwal, who serve as Outcome Health’s CEO and president respectively, also created an angel fund, Jumpstart Ventures. The fund has invested in more than 45 businesses, many of them based in Chicago, since 2011.

Outcome Health’s $500 million round — which reportedly valued the company at more than $5 billion — was one of the largest raised by a Chicago startup since Groupon raised $950 million in a round before its initial public offering in 2011.