Twenty years ago, China’s manufacturing-based economy was one-ninth the size of the U.S. economy. The gap has closed tremendously, driven in large part by the explosive growth in the nation’s mobile-connected middle class.

How explosive? Even living and working in China, sometimes it is difficult to appreciate the speed at which the innovation ecosystem is growing here. China is the second-largest venture capital market in the world and has seen VC fundraising more than double in the last two years, fueled by the global aspirations of the government, entrepreneurs, and investors.

A decade-long Chinese venture capital boom exploded in 2016, driving venture capital commitments above $50 billion, nearly matching the U.S. for the first time, according to an August SVB analysis of data from PitchBook and China-based Zero2IPO. That’s about a ten-fold increase compared to the amount raised in 2007. 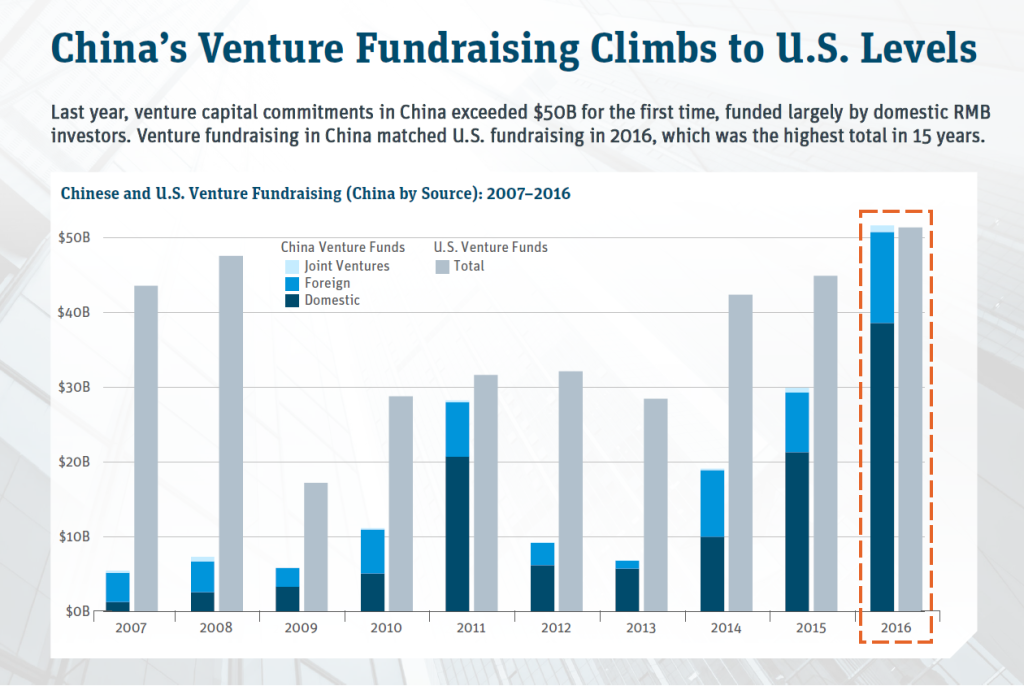 Above: SVB analysis based on Pitchbook and Zero2IPO’s PE data.

More impressively, China’s venture funds are now primarily raised from domestic sources: RMB funds accounted for 75 percent of China’s VC total in 2016, compared to just 25 percent a decade ago — and 50 percent in 2014.

How China has scaled so quickly

China’s booming venture capital asset class is being financed by supportive government guidance funds, cash-rich corporations, high-net worth individuals, and serial entrepreneurs who are reinvesting their proceeds from China’s first wave of successful exits. While the nation’s much anticipated transition from a manufacturing economy is hardly complete, access to talent and capital now rivals the U.S. and it is accelerating innovation – from the sharing economy to robotics and AI.

While U.S. technology giants emerged circa 1980-2000 primarily serving the enterprise market during the height of the PC revolution, China’s first wave of  innovators launched around 2000 mainly focusing on the emerging middle class, many of whom were mobile-first consumers.  With the arrival of mobile apps, China’s pioneers, notably internet behemoths Baidu, Alibaba and Tencent (BAT), rapidly expanded their footprints to offer a wide swath of services, allowing them to scale to impressive levels in just the last decade. That has set off a mammoth flow of VC fundraising and investment into mobile-based startups to meet the demands of always-connected consumers in China and beyond.

While some of China’s consumer internet companies at first found traction by copying successful U.S. companies, that line of thinking has changed. Meeting the demands of the young, urbanized and more affluent middle class has created entirely new products and services tailored to China’s cultural and consumer tastes. The emergence of micropayments is driving even speedier adoption in a nation with the most mobile-connected users on the planet.

Battle of the innovation giants

Not coincidentally, the growth of China’s innovation ecosystem and resulting capital boom is creating a global tussle over the future. From consumer messaging apps to frontier technology such as autonomous cars, overlapping strategic investments and acquisitions by China and U.S. technology giants underscore the competition to own the platforms of tomorrow.

Consumer investments naturally remain an area of focus for companies in both the U.S. and China. Alibaba and Amazon, for example, are battling for control of frictionless, on-demand commerce. And consider that each of the BAT companies holds a stake in Uber or Lyft. Meanwhile, Google and Microsoft hope to extend global enterprise dominance in the cloud.

China’s venture capital fundraising has nearly caught up with U.S. levels, driving Chinese innovation to new heights and prompting entrepreneurs and investors to look globally.  As I watch the innovation ecosystem here in China, I can’t help but believe that the momentum will only continue.